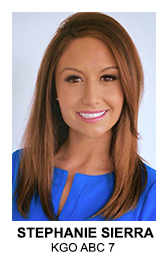 I’m a San Francisco native and after 8 years living elsewhere in the country, I’m thrilled to be home and part of the ABC7 family! I join the team as an investigative reporter.

My love of journalism started in a classroom at Mercy High School in Burlingame. At the time, ‘Career Day’ seemed like just a lucky break from the regular school grind of classes and homework. Little did I know it would change my life. I stumbled into a class entitled “A Day in the Life of a TV News Reporter.” Intrigued by the idea of highlighting what was going on in the world and prompting change, I was hooked.

I graduated from the University of Missouri where I majored in broadcast journalism. At the local NBC affiliate in Columbia, Missouri I was a reporter and anchor. Yes, I did read the legendary Wayne Freedman book. It’s titled “It Takes More Than Good Looks To Succeed In TV News” (Now required curriculum for the J-School!)

While there I earned a national Hearst award for a story that prompted the Sheriff to properly enforce rules that prohibited sex offenders from living too close to schools and day care facilities.

I then spent nearly 4 years braving the snow and high altitude of the Rockies at the ABC affiliate in Colorado Springs (KRDO-TV) as an anchor and investigative reporter. I covered torrential blizzards, grisly murder trials, and exposed scams that prompted action from the Federal Trade Commission.

I did a year-long investigation uncovering the illicit massage industry in southern Colorado, which resulted in six women being rescued from human trafficking operations.

In 2019, I was honored with a regional Edward R. Murrow award after exposing several contractor schemes which resulted in recovering over a hundred thousand dollars back to consumers. Those scams stemmed from a severe hail storm, which our team won a national Murrow award for breaking news coverage. Some of that hail was the size of grapefruits!

Say hello – I’d love to hear from you