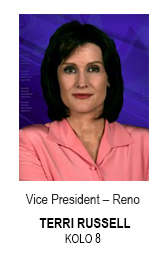 Terri Russell is unique in that she is a native Nevadan from Reno who attended schools locally through high school ultimately graduating from Reno High School. She then attended Arizona State University where she received a degree in Broadcasting.

Returning to her roots, Terri began her broadcasting career as an associate director for KTVN in Reno. Given a chance to advance by then-news director Ed Pearce, Terri steadily rose through the ranks and became a producer, general assignment reporter, medical reporter and fill-in anchor.

In 1989, Terri moved to Las Vegas and produced and reported a medical segment, which aired seven days a week for KVBC. She then moved into a writing position at KPTV in Portland, Oregon in 1995 and a year later became an anchor/reporter at KTCI in Vancouver, Washington.

In 1997, Terri moved back to “home” to be closer to family and was hired as a medical reporter by KOLO News Channel 8. She is currently a general assignment reporter with KOLO, Monday through Friday at the 5:00/6:30/11:00 newscasts.

Terri has received numerous awards and accolades, including:
an Emmy award for a series of reports on organ transplantation called “The Silent Heroes”

The 2009 Program also recieved an Associated Press Award as well as recognition from the Radio & Television News Directors Association.

She received an Edward R. Murrow Award in 2006 for an investigative series, “Are You Covered?”

She has been twice awarded Family Kaiser Foundation mini-fellowship in Health.

Vice President on the Board of Trustees for the San Francisco Chapter of the National Association of Television Arts and Sciences,
Terri won special commendation for her work with the academy at the Emmy Awards in 2005

In 2013 she was recognized by the NorCal RTNDA for two programs she produced, wrote, edited and narrated. Best Public Affairs Program: “Run, Retreat, Resist. Best and Best Long Form Program: “The Other Side Of The Fence.”

“Run, Retreat, Resist, was also nominated for an Emmy by the San Francisco NATAS Chapter in 2013.

When not working, Terri enjoys riding her two horses in the eastern Sierra Nevada Mountains, cooking, traveling, and taking care of two cats and bloodhound Wyatt.