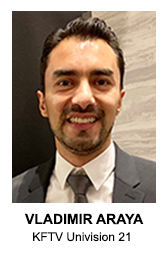 Vladimir Araya is the News Director at Univision Fresno KFTV 21. He joined Univision in 2011 as news producer and moved up the scale to different positions.  He worked in Los Angeles as photographer and assistant producer before moving to Fresno to join the Univision.

He graduated from Cal State Fullerton with a degree in Journalism and Mass Communications, TV, Radio, and Film and was part of the first college newscast in Spanish in the nation, at Santa Ana College, in Orange County, CA.  Vladimir has been the recipient of several Emmy® and Golden Mike awards with his Noticias 21 team