¿Como estan? ¿Como estamos? How are you? How are we?

Those were the big questions this Saturday as your Emmy® SF Awards committee hosted a forum for NATAS NorCal members who compete in the Spanish categories. I was honored to deliver the welcoming remarks as the Awards Committee vice-chair for the Spanish Contest.

This is a new position and one dedicated to making the Spanish contest the most viable and successful it can be. I hope that as a bilingual journalist who works in a duopoly, I can be a resource. If you have questions, need clarification or even just want to vent, please reach out. I put my contacts at the bottom of this post.

Our chapter’s Spanish contest was created in 2006. Our members who compete in Spanish add more than another set of categories in a second language. You contribute more voices, more perspectives, and more energy to the contest. To see some of our members doing work that would impossible – or even illegal in some of our countries of origin – is truly inspiring and should remind all of us of the privilege of a free press and the power of journalism.

Since that first contest in 2006, Spanish entries grew steadily through 2018 when entries peaked. Since then, Spanish entries have been declining. Last year, we only had 124 Spanish submissions, which is a 40% drop. Look at this: 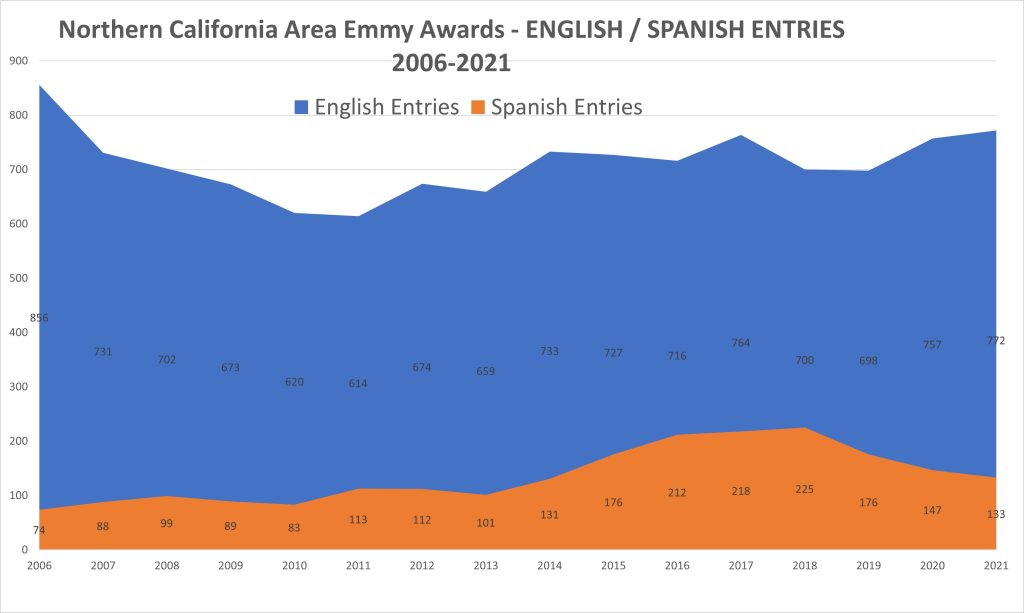 The board has gotten questions about the number of categories, how entries are judged, the cost, why Spanish and English entries are not judged together and more. We addressed many of these issues Saturday. If you couldn’t attend, this is a link to the discussion.

If you want to read rather than watch, here is how we addressed some of the issues that came up:

-Cost: Our chapter has not raised fees since 2016 and fees are tiered for large market, medium and small market entries. Our chapter is a non-profit, and because of the large number of statues awarded on Emmy night, the Spanish contest and Awards Gala run at deficits.

-Judging: When we submit our work for an Emmy, we agree to judge for other chapters when they send material to us. It’s a requirement that on average, only 20% of Spanish entrants meet. Our chapter has waived the $45 penalty for not judging, but we still need people to fulfill their obligations in both the Spanish and English contests. Bonus, if you want to know what wins, this is good way to see entries from other markets and what’s award-worthy and what’s not.

-Bias: Some entrants worry about bias, especially from judges with different station affiliations. This would be an unethical violation of judging rules. The judging pool is smaller for the Spanish contest than the English contest, because there are fewer Spanish stations and organizations. Consider this: in 2021, there were entrants from 69 English stations, production companies and other organizations. In the Spanish contest, there were just nine stations, production companies and other organizations.

-Blind Judging: Your entry is scored by members of other regional Emmy chapters. Only our Executive Director knows their markets or identities. He routinely scrutinizes the raw scores, looking for anything out of the ordinary. He has the authority to eliminate a troublesome judge and ask that they not judge for our chapter in the future.

-Number of Categories: The number of categories is dependent on the number of entries. A viable category must have a minimum of four submissions. When that viability standard is not met, our committee looks for a similar category with which to fairly combine the material. We call that rolling up. All entrants must agree. Entrants also have the option of withdrawing their entry and getting their entry fee refunded. Based on the number of 2021 entries, we expect to have 22 Spanish categories. This will allow more robust competition within each category. If we get enough entries, we can roll out some of that material into more categories.

-Bilingual Contest: Some members come from markets where English and Spanish entries are judged together. A long-time Awards Committee member points out that often, it looks like a single contest on Emmy night, but behind the scenes, the Spanish and English entries are judged separately by two different panels. As such, it is not a true bilingual contest. A true bilingual contest for our NorCal chapter would require all judges to be bilingual, which would exclude judges who only speak English or Spanish. This would further narrow the judging pool and exclude people with a depth of experience.

You can find a lot of answers in our chapter’s by-laws and in the Call For Entries, which will soon be finalized for this year’s contest. But, please know that the Awards Committee, your Board of Governors and your Trustees are all willing and able to address your concerns, answer your questions and provide clarity and transparency.

¿Y yo? I’ve been a working journalist for more than 25 years, including 18 in the Bay Area. I’ve been an entrant, a nominee but never a winner. I believe that’s a credit to the talent in this chapter! I stepped up to serve on the board when I heard the Spanish contest was struggling. I think it’s worth fighting for, for all of us, Spanish and English members alike. 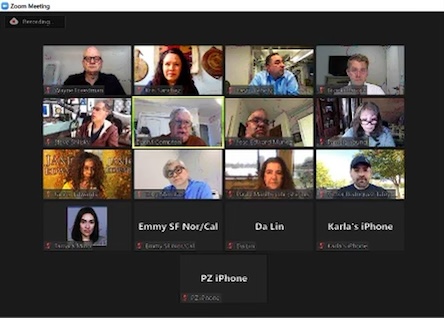