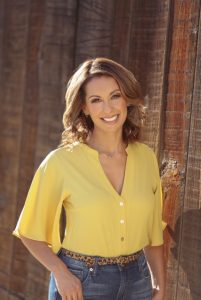 As news anchor/reporter in Sacramento at KCRA TV, I’m so fortunate to be working at the television station where I interned during college. I’m paid to read out loud for a living and give the community a voice. Beginning this month, I’ll have a new, live audience. They’re pint-sized 4-to 8-year-olds.

In March, my bilingual children’s book The Adventures of Mr. Macaw was released, featuring Latino characters. As a Latina and the mother of two little boys, I’m compelled to educate students about the importance of learning about their culture. Now, when I’m not at the station, I’m busy reading my book to young students in Northern California.

The reaction so far has been amazing. There is a huge need to create diverse books and make them accessible to schools, libraries, stores and communities at large. 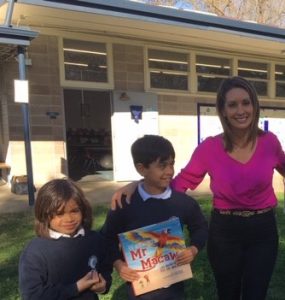 Leticia Ordaz and her sons Maxton and Bronx proudly pose with her new bilingual book “The Adventures of Mr. Macaw.”

I’ve written this book because it’s been so challenging finding books my sons can see themselves in. Turns out only five percent of the children’s books published every year in the U.S. feature Latino characters, most of them authored by non-Latinos. It’s great to see children captivated by a story I wrote and so rewarding to read it to them in two languages, as the book is written in English and Spanish.

I got to read my debut book during Read Across America to six different classes in West Sacramento. Some shy children approached me after to share that they have hopes and dreams of writing too. My heart melted. We all have the power to transform young lives and promote literacy.

After 20 years in the business, I still have the news bug and absolutely love my broadcast career.  My alarm still wakes me up at 2 a.m. to report the news, and I may never nap again with my new endeavor, but I wouldn’t have it any other way.

The Adventures of Mr. Macaw is hot off the press! You can find it on Amazon and www.cielitolindobooks.com

Next – I have another book coming out to encourage people from diverse communities to pursue a career in television. They say you write best what you know about. And here it is.

That Girl on TV Could Be Me: The Journey of a Latina News Anchor will be released in fall 2020.  It’s a biographical bilingual children’s book about overcoming barriers. It’s mixed in with some humor and fun stories that I believe will inspire more girls to get into journalism and professions where they can be a voice for their community. 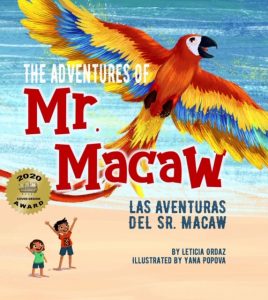 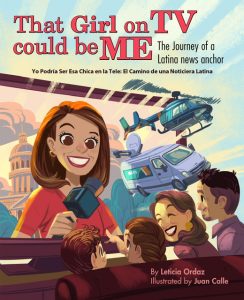