Remembering Wanda Ramey
Silver Circle Class of 1989
To help commemorate the 70th anniversary this month of KPIX 5 here in San Francisco — it was the Bay Area’s first television station, and it went on the air on Dec. 22, 1948 — we thought it would be nice to remember one of our early Silver Circle inductees.
Her name was Wanda Ramey, ahd she made an indelible mark on the television industry when she went to work at KPIX.
Back around 1993 or so, I had the wonderful pleasure and opportunity to meet Wanda Ramey. I remember her being one of the nicest women I’d ever met. 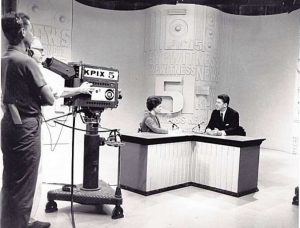 Wanda Ramey interviewing Ronald Reagan in 1966 at KPIX. The following year, he would become governor of California.

Ramey made history in the Bay Area. She also made history in the United States. She was the first female newscaster on the West Coast, and only one of two working in the country at that time. That’s when KPIX in San Francisco hired her, in 1957, as part of a new, half-hour midday news broadcast. Ramey was referred to in those days as “Channel 5’s Gal on the Go”, “Girl on the Beat” and “Woman on the Beat”. She was inducted into the Silver Circle of the San Francisco/Northern California Chapter of the National Academy of Television Arts and Sciences in 1989. 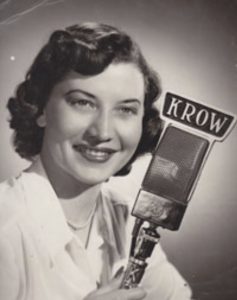 Ramey, born in Terre Haute, Indiana, moved to the Bay Area after graduating from Indiana State Teachers College in 1945. Her first post-college broadcasting job was at KPIK Radio in San Luis Obispo. After that, she returned to the Bay Area to work at several other stations. In 1952, Ramey was hired by KGO-TV in San Francisco to host Midday with Wanda, an interview program that didn’t last long. In 1954, she hosted The Woman Behind the Man, interviewing the wives of famous Bay Area men. She eventually went to work at KCBS Radio, hosting a show called Meet Me at Mannings, an interview program featuring women.
But, it wasn’t until 1957, when she was hired by KPIX, that her career really took off.
Ramey, at one time, estimated that she had interviewed more than 1,200 personalities during her career. Her most memorable interview was with Eleanor Roosevelt, who was Ramey’s own inspiration as a young girl.
Ramey left KPIX in 1967. She eventually served as a a Bay Area-based correspondent for 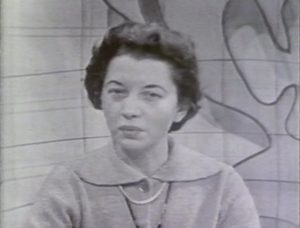 Voice of America and worked part-time at KQED Channel 9. In the late 1960s, she worked as a reporter at KGO-TV with its nightly Newsbeat newscast. Ramey, who received numerous honors and accolades during her career, including an Emmy Award, was married to Richard “Dick” Queirolo, a sheet-metal contractor and artist who later
became a TV camera operator, working alongside his wife.
Ramey died at her home in Greenbrae in 2009. Her longtime friend, comedienne
Phyllis Diller (a Bay Area native), said of Ramey at the time: “Having Wanda for a friend is like having a million dollars in your checking account.”
Kevin Wing authors the “Gold & Silver Circle Profiles” series for “Off Camera”. He has written more than 125 profiles since the series began in the summer of 2007. He is a 2013 inductee of the Silver Circle and a two-time Emmy Award honoree, currently with KNTV NBC Bay Area.