CHECK THE MASTER LIST – DEADLINE FOR ADDING NAMES IS MARCH 31

Thank you for entering the Emmy® Awards this year. You are not alone.

At the extended close of entries on Friday, January 19, we tallied 1,021 submissions by approximately 2,500 members in English and Spanish categories.

It appears that Emmy® Award Fever spreads as rampantly as the H1N1 flu virus.

Now, it falls upon the Emmy® Awards Committee to certify every entry and participant, and to assure that they qualify properly as defined by the Call For Entries. Our Chapter takes this massive task seriously in order to preserve the integrity of our competition. Members of your Awards Committee have already volunteered hundreds of collective hours of their time.

Check the Master List – Deadline for Adding Names is March 31
By now, you may have seen the Master Entry List. It contains all of the entries, though during the certification process, that list remains in a state of flux. This is your opportunity to review your entries and those of others. If you see a submission that may be misplaced or inappropriate, it is your responsibility to notify us. We will look into it. If you see an entry that is missing names, this is the time to make those corrections. If you want to add a name, you may do so until March 31st.

We will be sending your work to members of other Emmy® Award Chapters across the country for judging. At least seven panelists will view each submission. Later this spring, the Emmy® Awards Committee will determine recipients and nominees by looking at columns of returned numbers, one for each category. For objectivity’s sake, the panel never knows the correlation between columns and categories, hence the name “Blind Scoring.”

Having entered this year, you have also agreed to judge the work of other NATAS chapters. They will begin sending us material in March. The process is fascinating and educational. Judging provides an inside look at the state of our business. As an added benefit, judging provides insight for how to improve your entries, next year.

As an added incentive, judging also qualifies you for the member rates on submissions, next year. Fulfill your obligation to judge, or anticipate the higher entry fee. We will enforce that policy. 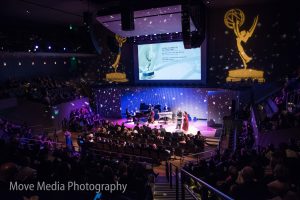 The 47th Northern California Area Emmy® Awards Gala for the San Francisco/Northern California Chapter of The National Academy of Television Arts & Sciences will be Saturday, June 2nd, returning to San Francisco’s classy SFJAZZ Center this year. The Chapter’s Emmy® Awards Gala has been held at the SFJAZZ Center since 2015. We will have details soon on the AWARDS page.

Thank you, again, for your fine work and support of this organization.

Good luck to all of you, and we look forward to seeing you on Emmy® Awards night, Saturday, June 2nd!