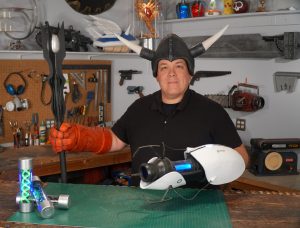 TV people are often creative types with personal hobbies and other professional outlets that support their muse. For Sacramento KVIE Editor Odin Abbott, he is a prop-maker extraordinaire. His props can be seen on YouTube and are used in documentaries, a PBS series called Beyond Geek and — sometimes movies. They decorate his edit bay and are — to say the least — unusual.

“I’ve always been the weird, creative type who liked making things with my hands,” Abbott said. “Costumes, model kits, tabletop games, I’d always want to make dinosaurs out of clay.”  Hence, Odin Makes is the name of his side-business.

Abbott works days as an editor. Then, at night, the bizarre emerges as he retreats to his prop shop. Attached is a link to one of his segments — on how to properly slice a grilled cheese sandwich — with a chainsaw. Take a look. It’s worth the chuckle!  https://youtu.be/yK_ZzNXZgOY

Yup. Abbott’s a little bit of an odd duck. However, given his profession, he may be more of the norm. As a rule, TV people possess creative talent and a humor found in few other professions. Abbott has both.

“I’ve been fortunate that I’ve somehow parlayed this passion into a little second career,” said Abbott. “My studio allows me to explore the unusual.  If I get a request, I give it a try.”

Some of the online requests received by Odin Makes include building the oxygen destroyer from the 1954 movie Godzilla — used in killing the creature at the end of the show. And then, there’s the Thomas the Tank Engine. So there you have it. A little bit of everything.

Abbott’s been working at KVIE, a PBS station, for three years and has received an Emmy® Award for a half-hour documentary he edited. Then, after his eight-hour job, either Odin Makes or — he goes Beyond Geek.

Beyond Geek is an independently-produced program that airs nationally on PBS. Beam Me Up, Telerobotics, High Flying Smackdown are just a few of the names of some episodes. For that show, Abbott also edits, runs camera, and of course – makes props.

And just in case you ever wondered how to make Hell Boy’s Right Hand of Doom as pictured on Abbott, or The Infinity Gauntlet from Avengers, Odin Makes can do it. His website Odin Makes demonstrates it all, showing readers how to create a combat-ready lightsaber and let’s not forget the demonstration on how to slice a grilled cheese sandwich with a chainsaw.

For more about Abbott’s creations, go to OdinMakes.com.