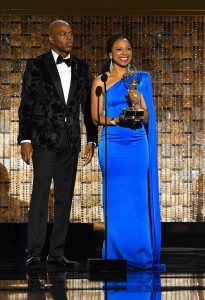 In addition to awarding Emmys in more than a dozen categories, the ceremony honored Days of Our Lives icon John Aniston with a Lifetime Achievement award, presented by Suzanne Rogers.

All awards are judged by a pool of more than 1,000 peer professionals from across the television industry, whose confidential ballots were then tabulated by the independent accounting firm of Lutz & Carr, LLP.