By Susan A. Bradley 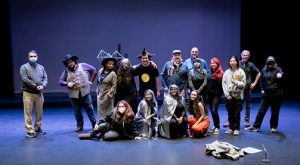 Spring 2021, students and teachers alike at Laney College, Oakland, found themselves in an unusual situation. Due to the COVID-19 pandemic health restrictions, all in-person classes were suddenly forced to meet remotely via Zoom. This was particularly difficult for the Theater Arts and Media Communication disciplines. Professor Michael Anthony Torres, Chair of Laney College Theater Arts, and Professor Steve Shlisky, Co-Chair Media Communications, came up with a unique idea.

Torres had been planning a performance of Macbeth, and Shlisky, who had been teaching a beginning video production course, decided to work together. According to Shlisky, “instead of being forced to produce content on Zoom, we turned that around, what if we were to choose Zoom as a creative choice. Macbeth is the result – it takes the format of a bunch of squares on a monitor and transforms it to a graphic novel with frames on a page.”

The collaboration on the Macbeth production successfully evolved into another joint production, this time in person. Disbelief, A Cassandra Tale, a play by Garret Jon Groenveld, is “the story of Apollo’s gift to Cassandra, a request of unreasonable love made by a God, and a person of faith who cannot comply with the demands the faith puts upon them.” The play had previously been performed solely as a Zoom Premiere Presentation hosted by PlayGround Zoom Fest in May 2021. Due to the pandemic theater closures of 2020 it was never performed live.

In the Fall of 2021, Torres and Shlisky decided to take the same experimental approach they used for Macbeth but with distinct advantages. Instead of the actors acting remotely on green screens as Torres had in the Zoom airing, and the video editors being restricted to the Zoom capture, now the actors could be on stage in a live theater and the media students could bring in the necessary cameras, lights, and audio equipment. The actors got to learn how to perform on-camera, quite different than live theater, and the media students were now able to work on a real-time production. The final production consisting of 27 scenes is a hybrid of live performance combined with a selection of 11 filmed scenes. Filming was completed during the Fall Semester. 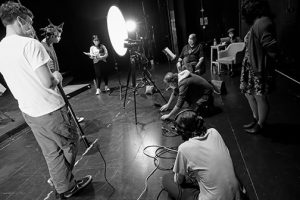 This brings us to Spring 2022. Torres had decided on the play dates, the actors needed to finalize their performances, costumes had to be found, rehearsals, stage blocking, testing the videos, and all of the minutia of production had to be worked out. Torres also decided it would be a good thing to use the behind-the-scenes photos for promotion. As part of the film crew, and one of the video editors, Laney student Susan A. Bradley had begun documenting the process through photos the previous semester. Bradley felt it was important to continue the collaboration and agreed to continue photographing the rehearsals and acting as liaison to the Laney Media and Photography departments. She worked closely with Professor Franklin Avery, and arranged to bring in three of the original students, videographers Emrys Mayell and Gabriel Studer-Randall, videographer/video editor Emilio Lopez, along with Professor Dale Nabeta, to film and record the three live performances at the Laney College Theater this April 2022. She also brought Shlisky in again, this time as cameraman. 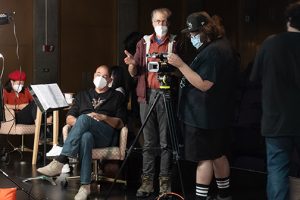 When asked what he thought was valuable to the media students Shlisky replied, “in video production disruptive things happen in real time. Filmmakers need to pivot based on what reality throws at them. The COVID lockdown created an opportunity to model a real life situation in the classroom. With “Macbeth” I challenged my students to find a creative trajectory to make a compelling feature. We were lucky to have Laney’s Theatre chair Michael Torres embrace and adapt the concept for his student actors. As a teacher, these things become a gentle push of students into out-of-the-box thinking. It’s exciting for me to demonstrate this logistical pivot as a real-life event, rather than just a class exercise.”

The playwright was able to attend two of the performances, noting this was the first time he had seen the play performed live instead of on Zoom. Additionally, he now wants to write a play specifically for the Laney College Theater group. Also in attendance was Laney College President Dr. Rudy Besikof.

All involved believe this is the beginning of a lasting partnership between the departments and look forward to the next production.

Many of the photographs can be found by visiting the theater group’s Facebook page at: The Laney College Theatre Arts Departments Fusion Project and on Instagram at: @the_fusion_theatre_project