Editor’s Note: This month, we remember George Reading, inducted into the Silver Circle 20 years ago this fall. This “Gold & Silver Circle Profiles” article, about the legendary Bay Area television anchor and reporter, first appeared in “Off Camera” in November 2009. Reading died on Oct. 8, 2014.

“I always thought Jimmy Hoffa looked like the perfect tough-talking thug. A Damon Runyon character right out of central casting. That is, until I interviewed him. Actually, he was a charmer,” says former Bay Area news anchor George Reading. 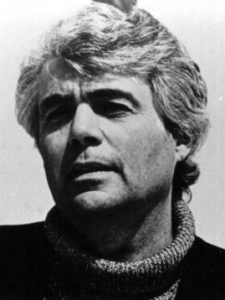 The legendary boss of the powerful Teamsters’ Union was just one of the many faces that Reading had the good fortune to run across in his 50 years in television news. He worked in such markets as New York City, Washington, D.C., Chicago, Los Angeles and the Bay Area.

An anchor mainstay in the Bay Area in the 1970s, Reading was already in the business nearly 20 years when he came to work in the Bay Area, first anchoring at KTVU in 1971. Three years later, he went across the Bay to KRON.

Now 80 (his birthday was Oct. 31), Reading is recalling a half-century in television news which reads like an American history book. Reading was inducted into the Silver Circle of the National Academy of Television Arts and Sciences’ San Francisco/Northern California Chapter in 1998.

It began for Reading in 1952. Leaving his native Providence, Rhode Island, he became a deejay at radio station WFNS while taking classes at Elon University in North Carolina. “It helped pay for college,” he says.

In 1953, Reading began his journalism career at WSJS radio and TV in Winston-Salem, North Carolina, where he also staffed a United Press news bureau. Four years later, he became an anchor for a station in Albany, New York, that was owned by Capital Cities. During the next four years, he was the station’s news anchor and news director.

“What I got paid then wouldn’t put food on the table today for a week,” Reading jokes.

At one point, Reading found himself in a studio timing the CBS radio broadcast of the network icon, Lowell Thomas, who had just returned from a ski trip to the Adirondacks.

“I sat in the studio with a stop watch,” Reading recalls. “At the appropriate moment, I nervously announced ‘This is the CBS Radio Network’. I guess it goes down as my network debut.”

In 1960, Reading was hired by General Electric to produce a series of documentaries for WRGB-TV in upstate New York.

“I got to cover the Presidential campaigners (Richard Nixon and John F. Kennedy) and New York governors Harriman and Nelson Rockefeller,” he recalls. During that time, Reading also interviewed San Francisco native Isaac Stern after his successful attempt to keep the wrecking ball from knocking down Carnegie Hall. Reading also sat in Capt. Ed Beach’s quarters aboard the USS Triton upon his return from his historic circumnavigation of the globe underwater following the route of Magellan.

One of Reading’s favorite interviews was with Mahalia Jackson. Reading met her when she was visiting western Massachusetts and staying at a large hotel at the same time a jazz school was being held.

“I was surprised when she told me she couldn’t read a note of music,” Reading says, “but she quickly assured me with a twinkle that her piano accompanist did. Then she asked, ‘Would you like me to sing for you?’ Wow, would I!” She did.

“When Mahalia Jackson stood in front of the mike (singing) ‘He’s Got The Whole World In His Hands’,” Reading says, “that large hotel lounge quickly became standing room only.”

Reading once interviewed Norman Rockwell, calling him an artist. Rockwell corrected him, insisting he was an illustrator. “History remembers Rockwell differently,” he says. “He’s an American original, the iconic painter of an ethos, a period of grand American nostalgia.”

Reading worked at WNEW in New York City in the early- to mid-1960’s, and was boarding his commuter when the stunning news hit the nation that President John F. Kennedy had been assassinated. From there, it was a short stint in St. Louis that would make way for a position as manager and correspondent of the CBS-TV stations news bureau in Washington, D.C.  Reading’s work spanned the turbulent 60’s, including the Democratic National Convention in Chicago, in 1968. 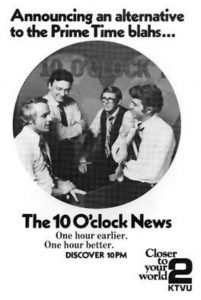 During his time at KTVU, he also worked on two monumental, ongoing Bay Area stories: the assassination by the Black Panthers of Oakland schools superintendent Marcus Foster in 1973, and the kidnapping of newspaper heiress Patricia Hearst by the Symbionese Liberation Army.

The anchor team would last two years, until Reading’s contract was bought out one evening between newscasts.

“It was a shocker,” he recalls. “I would come to learn a lot more by being fired than by being hired. It was a tough lesson in knowing who you really are.” Ironically, several years later, while working at KTTV in Los Angeles, KRON offered the anchor desk to Reading again, this time at double the salary.

In 1982, Reading won a Golden Mike award from the southern California chapter of the Radio Television News Directors Association for best reporting at KTTV for his “Campaign Close-up” series. In 1985, he was honored by Sigma Delta Chi for his documentary on northern Ireland’s “The Troubles”, which shed light on the bloody sectarian civil strife that plagued the northern half of that nation.

Reading had short stints at stations in Sacramento and San Diego, and “a kind of semi-retirement in Monterey (at KMST)”.

With Reading’s commercial television career at a crossroads, he signed on to host, report and produce a new PBS show, California Heartland, about the state’s biggest industry, agriculture. 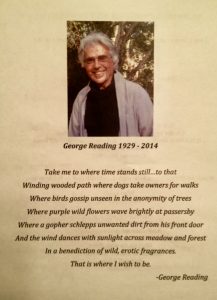 Remembering George Reading: His own words

In 2002, Reading was diagnosed with a rare form of cancer, becoming a patient at the Mayo Clinic. He retired in 2003 – his 50th year in broadcasting. Today, he lives on his beloved Monterey Peninsula, enjoying life and doing occasional voice-over projects through his firm, Voice Works.

“Nothing in those 50 years was more of an honor than in 1998, when I was inducted into the Silver Circle,” he says.  “There is no finer honor in the end than the recognition of your colleagues.”

Since 2007, Kevin Wing has penned his “Gold & Silver Circle Profiles” series for “Off Camera”. To date, he has written about more than 125 of the Chapter’s distinguished inductees. A two-time Emmy® award-honored journalist, he is currently with KNTV NBC Bay Area and is a 2013 Silver Circle inductee.