It didn’t strike me as remarkable until reflecting recently during a screening of Morgan Neville’s documentary, Won’t You Be My Neighbor?, on how unique it was for a TV host to relate to kids in a straightforward, honest and empathetic way. Won’t You Be My Neighbor? beautifully examines Rogers’ singularly focused mission to produce a show with no frills or fancy sets — just him talking and singing to kids about themes and issues that matter to them — including difficult to tackle subjects like divorce, racism and death. Neighbor makes the compelling case that Rogers was an innovator and pioneer of television who is as relevant today as he was during the years his show aired on PBS (1968-2001). 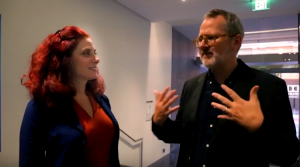 Thanks to my NATAS membership, I had the privilege of attending this Cinema Club private screening and Q&A with Oscar award-winning filmmaker Morgan Neville (Director, 20 Feet From Stardom) at the beautiful Dolby Cinema in San Francisco. And because I’m the social media coordinator for the San Francisco/Northern California Chapter of The National Academy of Television Arts & Sciences, I had the distinct honor of interviewing Neville.

What struck me was how perfectly Neville’s choice of subject, Rogers, embodied the spirit and mission of NATAS — to advance excellence and innovation in television. I was proud that in today’s divided socio-political times, our organization was taking part in highlighting work that promotes the best aspects of our common humanity — our ability to unify, to talk straight but compassionately to one another, to be kind to our neighbors. Sometimes in this day and age, it’s revolutionary just make eye contact and introduce ourselves to the person living next door.

Fred Rogers never shied away from, and in fact, made a point of addressing difficult subject matters that most adults tiptoe around with kids. He talked straight, he listened, and he validated young people’s feelings and thoughts. In turn, Morgan Neville has brought Fred Rogers and what he stood for back into the cultural conversation at an important moment. Watching the documentary literally reconnected me with my inner child. I was totally transported to a place of innocence, optimism and faith in community. I hope my interview will help in some small way to spread the message.