New “Off Camera” series: This is the first in a recurring “Off Camera” series we call “Day in the Life”. We hope you will enjoy this new series. From time to time, we will introduce you to someone within our Chapter with the hope of giving you an intriguing glimpse at what an average day is like for them. It could be a news producer, a photographer, a news director, or a reporter. Or, even a news anchor, such as who we are featuring this month in KTVU’s Frank Somerville. He’s been with the Oakland FOX O&O since 1992. His first 16 years at the station revolved around an early morning schedule, when he co-anchored “Mornings On 2”. Somerville eventually worked a split schedule so that he could anchor the morning show, then return in the afternoon to anchor the station’s 5 p.m. newscast. Since 2008, he has been anchoring KTVU’s 5 and 6 p.m. newscasts as well as its flagship 10 p.m. show. Gone are the days of waking up at 3 a.m. to work the dawn patrol. 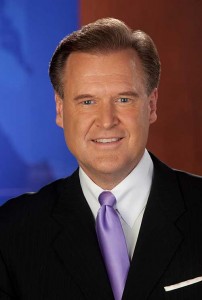 KTVU’s ever-popular Frank Somerville, who anchors the station’s 5, 6 and 10 p.m. newscasts, will be the first to tell you that he leads a rather ordinary life. He says there’s really nothing special about it.
What? Is he kidding?
Actually, he’s not. One of the most modest, most humble human beings I know, Somerville is dead serious. He has been this way for these 23 years that I’ve known him as a good friend and colleague. Nothing has changed. He is still the same as he was back in 1992, when we first met at KTVU.
He’s a truly nice guy.
But, beyond being the Oakland station’s No. 1 anchorman, a lot of people would beg to differ with him that his life is anything but ordinary. 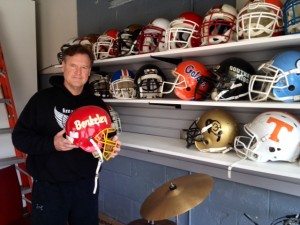 The man is popular. Without a doubt. And, whether viewers see him as one of their favorite Bay Area television news personalities, or as an everyman who is approachable, friendly and quite down-to-earth if they ever spotted him in the grocery store or at the gym working out, Somerville takes it all in with a genuine modesty that is second to none. He says who he says he is. He’s the genuine article. It could be, too, that people like, and admire the fact, that Somerville, who will soon be celebrating his 57th birthday, has strong Bay Area roots. He’s a proud Bay Area native. He grew up in Berkeley, graduated from San Francisco State University and lives in Oakland, not far from where he grew up. And, just as he is proud to be from here, the Bay Area is proud to call him its favorite son.
So, what’s an average day like for the multi-Emmy Award-winning Somerville?
8:30 a.m.
“I usually get up around 8:30 or 9 a.m.,” he says. Even before he wakes up, Somerville’s beautiful, spacious Oakland home has already been buzzing with activity. His wife of 22 years, Donna, is already out the door by 7 a.m. to take Sydney, their 15-year-old daughter, to school. 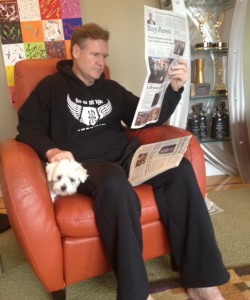 Callie, their 10-year-old daughter, is up and getting ready to leave for school by the time her Dad wakes up. She’s usually out the door by 8:30 a.m.
What’s for breakfast?
For Somerville, here’s his formula to get the day going.
“For breakfast? Honestly, I have a Rockstar over ice. That’s my caffeine,” he admits. “I sit down and start reading the papers. Sometimes, I’ll have a bowl or cereal, or toast with peanut butter.”
He’ll read the San Francisco Chronicle and Oakland Tribune. He also has his iPad to turn to, which has apps for the New York Times, Washington Post and San Jose Mercury News.
“I am constantly looking online to see what’s going on in the world,” Somerville says. “My morning consists of being aware of what’s going on. I watch our noon news every day so that I know what stories we’re covering. My whole objective is to know what’s going on and being up to speed.
What’s more, Somerville also stays informed as best as he can. He says it also helps him to come up with ideas for social media. He is on Twitter. And Facebook, too, where he has more than 24,000 followers. Somerville has more Facebook followers than some television stations.
“The station wanted us to be on Facebook, so I am always looking for ideas to write about,” he says. “I am very particular about what I post. I have to care about it. If I don’t care about it, what am I posting it for?”
And, practically all of the time, he is writing about something engaging and certainly interesting, as opposed to, say, taking a snapshot of his breakfast or lunch, or posting selfies.
“I am not interested in wasting people’s time,” Somerville explains. “I have to care about something to write about it. You can’t fake caring. You either care or you don’t. I am just being real, and what I write about is real stuff that involves real feelings. Getting people to feel.”
Somerville is certainly right about that
“People get to see me for who I am and what I’m all about. Facebook is like a window in to who I am. I am authentic, and people see that in me,” he adds.
10:30 a.m. 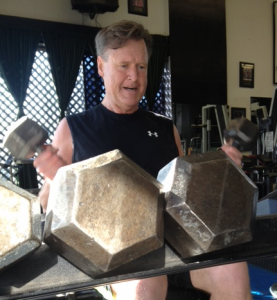 On this particular morning, Somerville wraps up reading the papers and
posting on Facebook and heads to God’s Gym, where he works out three times a week with a few others (myself included) and with a personal trainer, Gary Shields. Shields owns God’s Gym and is a certified personal trainer and sports nutritionist. The man knows his stuff. And, for 30 minutes, he puts Somerville and the others through a rapid-fire mix of various strength conditioning workouts. There is no time for chit chat. Ever.
“This is always going to be a hard workout,” Somerville says. “But, once you get here, it’s all good. I wouldn’t trade it for anything. I’m 56, and the older you get, the more important it is that you do something like this. It’s so easy to sit at home, do nothing, and not do any exercise. But, after a workout, I feel great.” 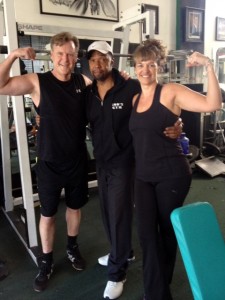 Going to the gym also means some “together time” for Somerville and his wife. She works out, too. Actually, it’s Mrs. Somerville who got her husband interested in going to the gym. She’s been going to the gym for 15 years. Her husband got started about 10 years ago.
“It’s one of our times together during the course of the day,” Somerville says. “Donna and I encourage each other at the gym, to keep pushing.”
Noon
On this particular day, Somerville went from the gym to working out again, this time across town, at a krav maga studio.
He had always wanted to learn some form of martial arts when he was younger. But, when Somerville turned 50, he made a point to learn. 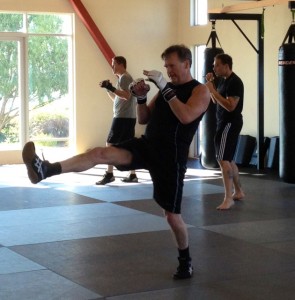 “That’s when I decided I was either going to learn it, or I wasn’t,” he says. “So, I trained in aikido. That’s what Steven Seagal does. So, I did that for three years. And then, I checked our krav and found out how much more practical it is. It’s always very aggressive, and it’s what krav maga prides itself on being.”
It’s all about self-defense, Somerville says. “I wanted something that could teach me what to do if I was ever in a situation. In krav, they tell you to go to a very dark place from within, and that you would say to someone, ‘you are not going to hurt me’. And that I’m going to do all I can do to defend myself and not be a victim.” 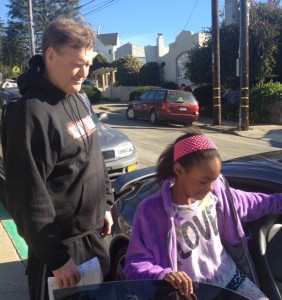 1:30 p.m.
Somerville picks up daughter Callie from school, and they drive home. That’s when it’s time for Somerville to get cleaned up and ready for work. He makes a couple of peanut butter and jelly sandwiches to take to work.
3 p.m.
Somerville arrives at the station’s Jack London Square studios. From 3 to his first newscast at 5 p.m., he’s going over scripts.
5 p.m.
His first newscast of the evening. He’ll do it again at 6 p.m.
6:30 p.m.
With two newscasts wrapped up, Somerville has time for dinner. Remember those peanut butter and jelly sandwiches? He’s been a staunch vegetarian since he was a kid. But, sometimes, instead of having dinner, Somerville will go back to the krav studio. He says it really helps him to clear his mind.
8 p.m.
By this time, Somerville is showered, dressed for work again and back at his desk. He says he’s never involved in meetings.
“I strictly go over the scripts, and I will make suggestions,” he says. “I am also looking for story ideas when I’m at my desk. I keep my eye on different websites 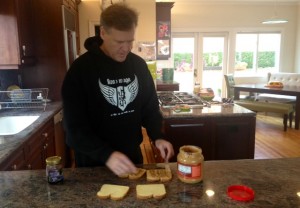 9:50 p.m.
By this time, he’s finished proofing scripts and has some time to answer
emails. Then, with less than 10 minutes to air time, Somerville leaves his desk and heads into the studio.
11 p.m.
With the show over, Somerville heads back to his desk. He’s ready to go home, but first, he’ll take a few minutes to finish answering a few emails. He also takes time to read some of the comments and replies to his popular Facebook posts.
“My feeling is it’s important to have interaction,” he says. “I learn by reading the comments. I am interested in that. “I am not doing it just for the fun of it. I do it because I care. And, if I put something out there that asks people to respond, why would I not read what they wrote to me? That would be disingenuous.”|
Finally, it’s time for Somerville to head home, in his 2007 Porsche 911 Turbo.
“I love driving,” he says. “But, because I live so close to work, I will take city streets home just to stretch out the drive. I love feeling the acceleration. And the sound of the engine. I love seeing it, and hearing it.”

Kevin Wing is a San Francisco-based producer for ABC News’ “Good Morning America”. He is also regional vice president, representing San Francisco, on the Board of Governors of the San Francisco/Northern California Chapter of the National Academy of Television Arts and Sciences, and serves as editor of “Off Camera”. Tweet
Kevin@KevinWingABC