Reno KOLO 8 News Now – From Louisville, Kentucky, Tabnie Dozier is becoming accustomed to the dry weather in the Reno market. Dozier is evening anchor at KOLO, the ABC affiliate. “This is my third market,” said Dozier. She grew up in Kentucky, the place she said she’ll forever consider her home. Dozier has a Bachelor’s Degree in Broadcast News and a minor in Spanish from Western Kentucky University. She said that life is good and very dry in Reno. Dozier arrived in Reno July 2018 and has been reporting at the station. She’s now holding down the anchor desk. “Moving across the country is a major change to say the least,” said Dozier. But when you know not a soul, the climate is different and you’re the only Black on-air talent, talk about an unforgettable journey.” Dozier is a recipient of a Regional Edward R. Murrow Award and a two-time Emmy®-nominated anchor/reporter. She’s committed to helping people thrive and a dedicated member of the National Association of Black Journalists. 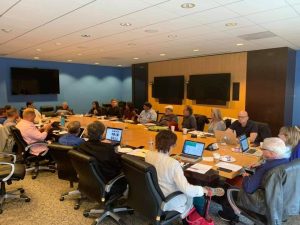 San Francisco KGO-TV – Annually, the SF/Northern California Chapter of NATAS holds a retreat to discuss direction for events including Gold and Silver Circle and the Emmy® Gala. Governors who sit on the board this year met at KGO-TV in San Francisco. The retreat included representation from a variety of TV stations, markets and organizations involved with media producing including The San Francisco Giants, Univision, PBS, and Independent Producers. Geographic diversity also is well represented including Reno, Fresno, Hawaii, Sacramento and San Francisco. The body is diverse in order to best represent the changing landscape of the industry. Working on behalf of the industry – watch for good things ahead!

Fresno – At that annual retreat and Board of Governors’ meeting, Fresno is weighing-in with great representation. New board members include Raul Lima from Univision 21, Jose Munoz, also from Univision and Lexi Sisk, Iron Pine Media. These three join Fresno Governors Richard Harmelink and Kim Stephens. By the way, Off Camera is committed to translating upcoming articles into Spanish for readers. Lima has volunteered to take on that endeavor. Thank you all for your service. 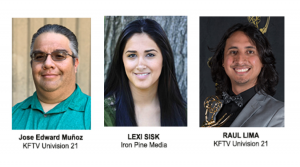 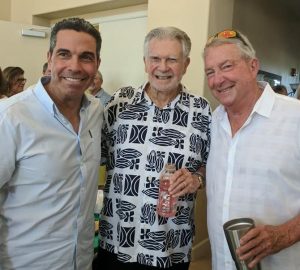 Sacramento KCRA – A great time was had by all and it was a reunion of veterans and present-day broadcasters, all working at KCRA 3. Organized by Evening Anchor Edie Lambert, the Channel 3 reunion was informal but full of heart and soul. Old-timers were acknowledged for their integrity and new-comers acknowledged for keeping that integrity going. Of special interest was seeing Veteran News Anchors Stan Atkinson and Dave Walker meet up with current KCRA Anchor Gulstan Dart. Atkinson received the Governors’ Award, the highest honor a chapter can bestow upon a broadcaster, a couple of years ago. Walker and his wife Lois Hart were the first anchor team to kick-off the Cable News Network – CNN 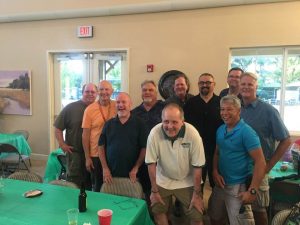 Sacramento KVIE/PBS – Odin Abbott is an editor by day. By night, his brain travels to another dimension and he makes movie props. And he documents how they’re made on his YouTube channel. And it’s popular, garnering thousands of hits. This month, his YouTube channel is being recognized by Sacramento News & Review’s Best of Sacramento. “I love making superhero props from foam and then demonstrating to viewers how they’re made is a challenge but fulfilling,” said Abbott. “My channel is a one man show. I build projects, write shoot and edit nearly every episode.” 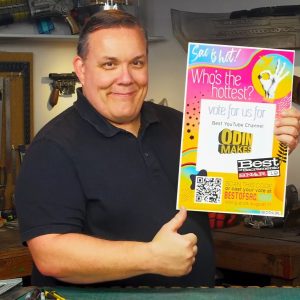