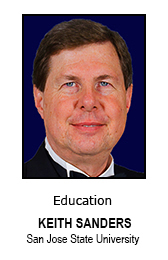 Keith Sanders was born in Orange, California and lived in Fullerton until he was 11. His family moved to Saratoga where he became interested in making claymation cartoons and 8mm movies as a teen. His attraction to visual storytelling continued as he enrolled at San José State University as a Radio, TV & Film major. Before graduation, he began work at a small San Jose UHF station, KGSC-TV.

He was one of the original camera operators for their flagship show “The 7:30 News.” In 1984 he was promoted to director of “The News at Noon,” and honed his production skills by directing commercials. He received a Joey for directing “The Best TV Commercial Produced by a TV Station” in 1987. It was a Golden State Warriors promo.

In 1995 Keith became Executive Producer of the station’s high-tech recruitment show “Silicon Valley Careers,” and also wrote and produced three documentaries including “DNA, The Book of Life” (nominated for an Emmy®). All business producers were laid off at the end of 2003 and he soon returned to his alma mater as a Media Producer. There he directed live events and produced several mediated courses including the Emmy® nominated Justice Studies 132, as well as the Career Center’s “Internship Journey” that won the Chevron NACE Award for Outstanding Achievement.

Keith has been a member of the National Academy of Television Arts & Sciences chapter Board of Governors since 2000. He served four years as Managing Producer of the local Emmy® Awards Show, and completed terms as Secretary, South Bay Area Vice President, San Francisco Vice President and Chapter President. He now serves as Education Chair.

In 2014 he graduated from CSU Fullerton with a Master of Science degree in Instructional Design & Technology. He now integrates instructional design into his current work as Media Producer at SJSU.