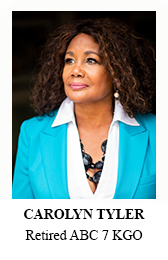 Carolyn Tyler is best known for her award-winning 32-year career as an anchor and reporter at KGO-TV ABC7.

Tyler has received numerous honors for her work, including George Foster Peabody and Edward R. Murrow awards for the station’s team coverage of the devastating Loma Prieta earthquake in 1989. Tyler is also extremely proud of her coverage of gay marriage, beginning at San Francisco City Hall in 2004 and running through the U.S. Supreme Court decision in 2015. In 2007, NATAS-SF inducted Tyler into the distinguished Silver Circle.

She is a longtime member of the Bay Area Black Journalists Association and was the founding co-chairperson of Friends of Faith, a non-profit organization that raised funds and awareness for low-income breast cancer survivors in the Bay Area. Tyler is also a new member of the San Francisco Film Commission.

Tyler holds a Bachelor of Arts degree in broadcasting from the University of Wyoming. She also received specialized journalism training at Vanderbilt University and at the University of Southern California’s Annenberg School for Communication in collaboration with the Poynter Institute. She grew up in Wyoming.