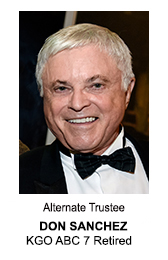 Yes, that’s Don Sanchez in that picture. Same person, different looks after so many years on Bay Area TV. Gone is the mustache. He shaved it off for charity. Don is retired from broadcasting, but that doesn’t diminish his love, fascination and respect for the industry. He is still serving as a member of the SAG-AFTRA board.  After graduating from the University of Southern California in telecommunications, Don returned to the Central Coast to do radio and then was hired for his first TV job as a reporter at KSBY-TV in San Luis Obispo in 1963. Don’s only other TV job was at KGO-TV in San Francisco.  He started there in September, 1972, and spent the next 40 years and three months as a reporter, sports reporter, news anchor, talk show host (“good morning bay area” in 1989) and finally the arts and entertainment reporter for the last 12 years. Don has won 5 EMMY® Awards, including the prestigious Governor’s award in 2013 and is a member of the NATAS Silver Circle and the Broadcast Legends. Don is proud of his 50 year career in television which  is why he would be honored to be part of the Academy Board to continue to assuring the quality of our industry. DON SANCHEZ, (Retired) Anchor, Reporter, KGO, San Francisco