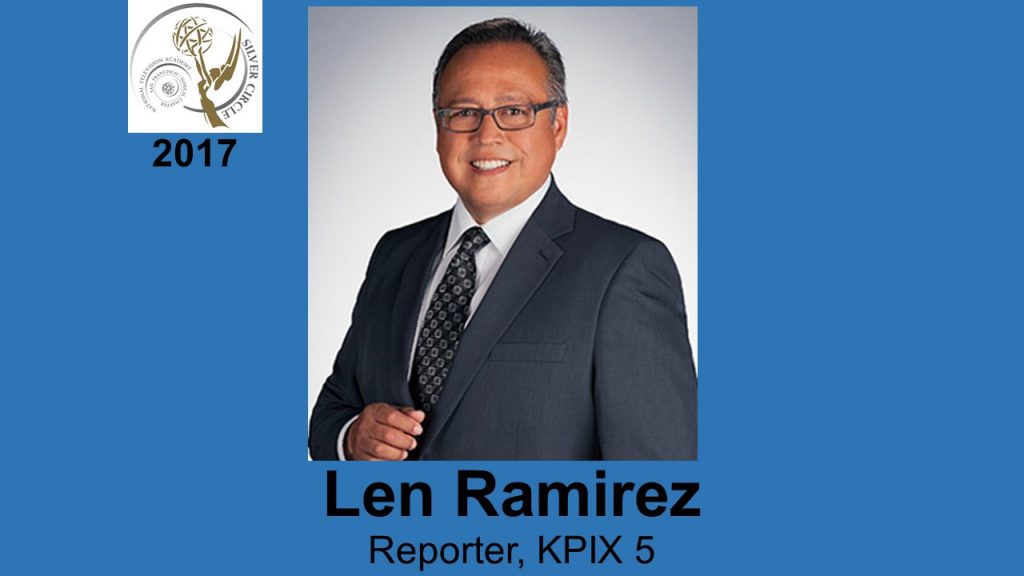 San Jose native, Len Ramirez, has been a news reporter for KPIX 5 News covering the Santa Clara County/South Bay Region since 1989. His interest in journalism started while at James Lick High School when he became sports editor of The Observer, the school newspaper. Prior to his arrival at KPIX 5, he was a general assignment reporter for KOMO 4 in Seattle, KMST 46 in Monterey and KSBW 8 in Salinas. Throughout his career, Ramirez has covered several major national and international stories including the Mexico City earthquake, the Los Angeles riots, the O.J. Simpson murder trial, and the Scott Peterson case. He received an Emmy® award in 2003 for Best Daytime Newscast; along with several nominations for investigative journalism, breaking news and technical achievement. Ramirez has been the recipient of three Best News Story awards from RTNDA, and was honored with the Ruben Salazar Journalism Award from the California Chicano News Media Association. An advocate for education, Ramirez often volunteers his time mentoring students and encouraging them to realize their potential. He is a frequent guest speaker at San Jose’s Latino Role Model Conference, was selected as one of ten most influential Latino journalists by San Jose Magazine and MACSA in 2007 and was selected as a “2011 Top Community Dad” by Building Peaceful Families, the Santa Clara Office of Education and the San Francisco 49ers. Ramirez received the John Swett award in 2012 for excellence in education reporting by the California Teachers association and was inducted into the East Side Union High School District Thomas P. Ryan Hall of Fame in 2012. Ramirez and his family were awarded the La Familia award in 2013 by the Hispanic Foundation of Silicon Valley for their multi-generational work in public service. He is a member of the National Association of Hispanic Journalists and the California Chicano News Media Association. Ramirez graduated from San Jose State University in 1983 with a degree in journalism and political science. He lives in San Jose with his wife Julie and their children, Lenny, 20, Amanda, 18 and Lucas, 15.