She was, without any doubt in my mind, my most favorite professor during my years at San José State University. 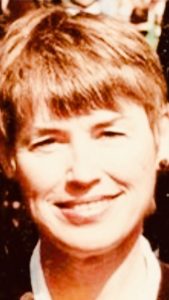 Darla Belshe, a veteran San Francisco Bay Area television journalist who left a burgeoning career as a reporter and writer to become a beloved, well-respected professor to two generations of broadcast news students at San José State – her alma mater — has died.

Darla died May 9 at the age of 79 from complications of dementia. The news of her death was made public in early July. She passed away at a care facility in Calaveras County, near where her family lives. For many years, Darla lived in Santa Cruz. Before she retired in the late 1990s after 25 years at San José State, Darla commuted along Highway 17 through the Santa Cruz Mountains to get to work in San Jose.

I’m certain that many of Darla’s former students from San Jose State – and there are thousands of us spanning her 25-year career there – will agree that there was only one Darla and that she will be missed.

Darla was born Feb. 28, 1940, to Boyne and Doris Grainger. Darla went on to San José State, where she graduated in 1961. After graduating, she pursued her work as a television journalist. She didn’t have to look too far. She was hired at KNTV Channel 11 in San Jose. She wore a lot of hats there. She was a reporter. She was a producer. And, naturally, she was a writer. And, the station is where Darla met her future husband, Bob Belshe. Bob was a sports anchor at KNTV, eventually becoming its main anchor for 20 years, from 1962 to 1982. If Bob’s name doesn’t sound too familiar, that’s because he went by the name of Don Hayward when he was on the air, a suggestion made by a news manager who felt that Bob needed to offer television viewers a more memorable name. The name stuck, and Don (or Bob) became a household name in the Santa Clara Valley for decades.

Darla worked at KNTV’s Park Avenue studios for 16 years before deciding that she wanted to teach television to college students, so she left KNTV to become a professor at San José State in the 1970s. Darla was not only an outstanding professor. She was a mentor, to so many of us. I adored Darla. I learned so much from her during my years at San José State from 1984 to 1987. She made coming to class a lot of fun, for all of us. My class with her was for “SJSU Update News”, our award-winning, 30-minute weekly newscast. She taught me how to write in active voice. She taught me how to do stand-ups. She taught me to sit up straight in the anchor chair. Most importantly, she showed me how to connect with my audience. And, between my writing and how I spoke to my audience, Darla showed me what it would take to engage my audience to want to watch. The day after our newscasts, Darla and all of us in the class would critique our show. She’d praise us for a job well done. But, she’d also tell us what we could do better for the next newscast. All very good lessons that I remember to this day in my daily work. 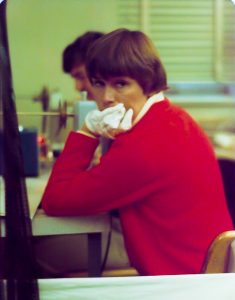 Darla, in the edit suite late one Thursday night in 1977.

I still have all of my “Update News” airchecks from all those years ago, including the special 30-minute broadcast all of us made to commemorate the 50th anniversary of San José State’s Department of Journalism and Mass Communications. Darla selected me to co-anchor that special. I was so grateful for the opportunity. I never forgot Darla’s vote of confidence in me.

Darla taught so many of us during her 25 years of teaching in San José State’s Department of Journalism and Mass Communications, which, for many years, has been considered the best journalism school west of the Mississippi.

Several of my classmates who were under Darla’s watchful eye included Jim Bunner, now an assistant news director in San Diego. He’s worked at KGTV, the ABC station there, and he’s now at KFMB-TV, the CBS station (and the station I worked at back in 1988). Jim was one of our shining stars on “Update News” and, when we were at San José State, I wanted to be like him. I always admired Jim, like I still do to this day. His brother, Steve, is also a San José State graduate and a former student of Darla’s. Steve has spent most of his television career as a producer at KGO-TV ABC7 here in San Francisco. Like his brother, Steve is definitely someone who learned a lot from Darla.

Mentioning Darla’s students and my classmates from the mid-1980s wouldn’t be complete without talking a little about Polly Gonzalez. I always adored Polly when we were classmates. She had it together. We co-anchored “Update News” once or twice upon Darla’s pairing. Polly was a rocket; right after graduation, she was hired immediately by the small markets where most of us have gone to pay our dues and earn our stripes. Ultimately, Polly went on to become an anchor at KLAS-TV, the CBS station in Las Vegas. She worked there for a dozen years and made a big name for herself. Polly’s life ended tragically, in 2005, when she was killed in a solo vehicle accident in Death Valley. She was returning to Las Vegas after visiting her family in the Bay Area. Her two young daughters were with her; they survived the crash. A memorial park in Las Vegas is now named for Polly. Perhaps Darla and Polly are catching up in Heaven. I hope they are.

Steve Shlisky, our Chapter’s president, wrote, produced, edited and shot for three semesters on Update News in the late 1970’s. In fact, Steve credits Darla with helping him to get his first broadcast job.

“I have Darla to thank for my long career in Bay Area television,” Steve says. “On ‘Update News’, she taught me real professionalism: editing to tell a story; surviving late nights to produce a newscast; and critiquing past newscasts to make future ones better. She was instrumental in getting me a job at KNTV. I remember her always positive attitude when work got most challenging. I miss you, Darla.” 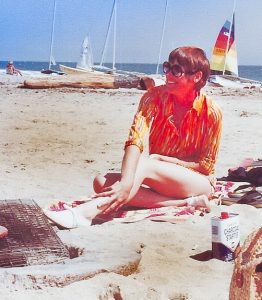 Darla at and end-of-semester hosted a beach she hosted for students, Spring 1978.

Darla, you were simply the best. I won’t ever forget you and the lessons you taught me about the business, and about life. If only all professors and mentors would have been as special as you were to me and to so many others. But, then, that would’ve been impossible. No one could ever be like you. I will always have my fondest memories from San José State wrapped up in my classes with you. I’ll never forget how Don, after he retired from KNTV, would visit your classes to help all of us with speaking and writing and presence. How lucky all of us were at that time to be not only exposed to your experience and knowledge, but to have both of you to show us the ropes. Both of you were a dynamic duo. May you both now rest in peace, together in Heaven for all eternity.

Darla, thank you so much for showing me how to do it right. I will always miss you, and I won’t ever forget you.

Darla was preceded in death by her husband, who passed away in 2002, and by her parents. She is survived by her sister, Linda Reece, and brother, Arlen Grainger. Also survived by stepchildren, Debbie Dorr and Kris Belshe, six grandchildren and six great-grandchildren.