If Sacramento journalist David Manoucheri hadn’t launched his television news career 30 years ago, he would’ve likely found himself being a rock star today.

The special projects producer and investigative producer for KCRA 3 loves his television work, and it shows. But, the Emmy® Award-winning storyteller for Sacramento’s NBC affiliate loves music as well. 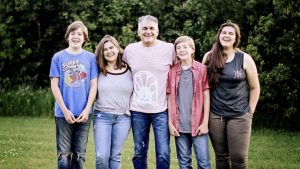 Manoucheri not only writes music, he’s a performer as well.

It’s so true that any of us has the ability to pursue more than one passion in life. Manoucheri has been doing just that. In fact, this fall, he went into a recording studio to record an LP for the first time in nearly 20 years.

“It’s my first record since 2001,” Manoucheri said in an interview with Off Camera. “I’m really proud of it. It’s been a long time.”

“Journalism is fantastic,” Manoucheri adds. “Someone asked me once about what I would do if I’m not working in television, and music is it.”

Music has truly been a part of Manoucheri’s life since he was a young boy growing up in the little Nebraska town of O’Neill.

“My Dad brought music home all the time,” he explains. “My Mom sang, and and my Dad had everything from Led Zeppelin and Aerosmith to Thelonious Monk. Friends loved coming to my house because we had great music playing all the time.”

Manoucheri started playing the guitar when he was a teenager.

“I have a 1985 Stratocaster,” he says proudly. “I always plink on that guitar. The guitar is literally like my left arm. I feel very comfortable with a guitar around my neck.”

Manoucheri says his music became even more a part of his life, after tragedy struck eight years ago. In 2011, his wife, Andrea Andrews, died on their 18th wedding anniversary. Like her husband, Andrews had also worked in television news as a reporter and anchor. Her passing, and at such a young age – she would have been 49 this year — was completely unexpected, and it left Manoucheri to become a single father to their two daughters and twin sons.

As for Manoucheri’s music, it has helped him to get in touch with his emotional side since losing his wife.

“The music is really a part of who I am, but even more so now than ever before,” he says. “My music has given me the freedom to open up.” 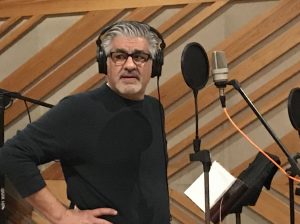 So much so that Manoucheri and his band, Ain’t Got No Time Blues & Rock Band, have cut 11 new tracks for his forthcoming solo album, When the Giants Fell. They recorded the songs at Pus Cavern, a recording studio in Sacramento. They did it all in just two days.

“When I get up on stage or go into a recording studio with these guys, and when everything is feeling good, it’s a great feeling, and it’s really healing,” he says.

When Manoucheri and the band perform, they play mostly covers, he says. But, they also play original songs, too.

“The title track comes from a phrase from my daughter,” Manoucheri explains. “When you’re a little kid, you live in the land of giants. But, as a child, it’s difficult to understand when you realize that giants can fall.”

“I wrote a lot of material 20 years ago, too,” he adds. And, he wrote an album’s worth of material after his wife passed away. His music had been relegated to a hobby during his marriage, but it helped him to heal. In March 2016, he went in to a recording studio for the first time to record a track. The result was Manoucheri’s first single, “When the Morning Comes”, which was released that spring.

There is no release date yet for the album. Manoucheri says it is being mastered in Nebraska – his home state – at a studio in Omaha. The mastering was expected to be completed days before Thanksgiving.

Meantime, Manoucheri will continue to toil away as an investigative producer and special projects producer at KCRA. When he’s not in the field and not at the station’s studios on Television Circle, he will be tending to his music and his responsibilities as a loving father to his four children. For instance, he does everything he can to get home after work to make dinner for his family.

SPECIAL NATAS OFFER: Manoucheri is offering a free high-resolution audio download of the LP prior to the album’s release. If you would like to receive this free download, please email him at davemanoucheriguitarist@gmail.com.