It seems impossible to think that the keen photographic eye of talented Emmy® Award-winning photojournalist Randy Davis almost didn’t grace Bay Area television screens these last 40 years, had it not been for the fact that business school just wasn’t working out at the time for this son of a veteran San Francisco television news reporter and anchor. 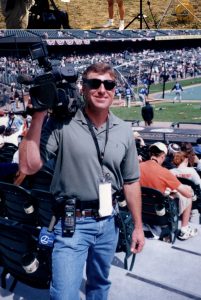 But, what came to be is a television career that has now spanned four decades. And, at the same San Francisco TV station. Who achieves that? Well, let’s just say not many do. After all, the Bay Area television market is not only one of the most sought after to work in the United States, making it one of the most competitive in the business, the Bay Area has always been a highly desirable place to live.

But, Davis – who was inducted into the Silver Circle of the San Francisco/Northern California Chapter of The National Academy of Television Arts & Sciences in 2016 for his more than 25 years of contributions to the industry – has, without a doubt, succeeded.

He is celebrating his 40th year at KGO-TV ABC7 in San Francisco. That’s right, 40 years. While most aspiring photographers, reporters and producers need to go to work after college to toil away in the small TV markets, Davis started his career at KGO-TV. 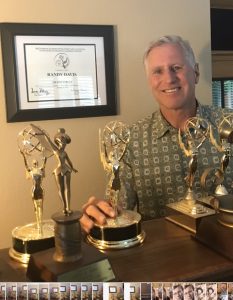 In the interest of full disclosure, Randy’s father, the legendary Steve Davis, was one of the station’s most prominent anchors and reporters at KGO-TV in 1979, the year Randy started at the station as a stringer, or freelance photographer. And, while some at the time might have cried nepotism, suffice it to say that while his father did work at the station – from the early 1970s to the early 1990s — Randy never wanted to follow in his Dad’s footsteps. At all.

“I was in business school, and I decided I didn’t like business school,” Randy Davis said. “But, I was foundering. And, I was wondering what I was going to do. And, so I thought I’d give TV news a shot. My Dad tried to discourage it. He thought, ‘Well, you know it’s a good industry, but I’d rather see you do something else.”

Randy said “that’s the truth of it. I never had any intention of being in this business.”

Nevertheless, it was Davis’ destiny. In fact, he still remembers his first day at KGO-TV.

“I was a stringer,” he said. “Of course, we all start out that way, stringing, and stringing with other freelancers, competing for opportunities to work. And so, the first day, it was like ‘Who wants to work with the new kid?’. But, it was different, because through my Dad working at the station, I knew all of the reporters. And they knew me.” 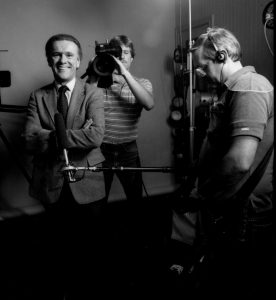 Davis said he ended up doing VOs and VOSOTs at first, and usually was the one to shoot a pretty weather shot.

He also remembers reporter and anchor Suzanne Saunders (Shaw) as the first reporter he worked with.

Davis remembers being “overwhelmed, and trying too hard.” He said ended up being “very clutzy”.

Saunders told him he was doing a good job, but that he spent too much time setting up lights and trying to get the right camera angles.

“This is the business of getting things done,” Davis said. “I learned that right away from Suzanne. Most of the time, we don’t have the luxury of spending a lot of time on each shot. We almost intuitively know what we need to do, and we get it done.”

In those early days, Davis worked with many reporters, including Ed Leslie, Carol Ivy, Lee McEachern, Peter Cleaveland and, of course, Don Sanchez, who ended up remaining with the station for four decades.

In the late 1970s and early 1980s, TV was still young, Davis said. A lot of people who worked in newspapers and magazines were coming over to work in TV news. The industry, he said, was still going through a growth period.

Before KGO-TV moved into its current ABC Broadcast Center location on Front Street in San Francisco in 1985, it was housed in cramped quarters on Golden Gate Avenue in the city’s seedy Tenderloin neighborhood.

“That newsroom was cramped and tiny and it was wonderful,” Davis said. “What could be better? It had what we don’t get enough of now. It had personality. TV news was meant to have emotion. It needs that and it flourishes in that. We had that back then. People used to shout at each other over the typewriters back then. Everyone got it. It wasn’t being vicious. It was what we did. They were excited about what they were doing and they liked it.”

After three years of freelancing at KGO-TV and at KTVU in Oakland and KICU in San Jose, the station finally hired Davis full-time. And since then, he has nearly done it all. Davis has certainly covered many types of stories throughout his four decades in television news.

Davis covered the Loma Prieta earthquake in 1989, the Oakland Hills firestorm in 1991, the Oklahoma City bombing in 1995, all national political conventions, various Super Bowls and more. He was sent to New York City following the Sept. 11 terror attacks in 2001.

“We couldn’t get a flight out of the Bay Area for New York, so we ended up driving there,” Davis said of his work with then-KGO-TV reporter, Jim Wieder. A few days later, they arrived.

“New York is a busy, noisy place,” Davis said. “When we got there, it was absolutely silent. I don’t know what I was expecting. Everyone was starting over again. People really didn’t know what to do with themselves.”

The story that Davis said has affected him the most was the 1999 massacre at Columbine High School in Colorado, where 12 students and a teacher died in a mass shooting at the hands of two senior students.

The mass shooting in 2012 that killed 26 children and six adults at Sandy Hook Elementary School in Newtown, Connecticut, was “emotionally devastating”.

“We got on a plane as soon as we found out, (reporter) Laura Anthony and me,” Davis said. “We went straight to the school. When we got there, we saw people from everywhere assembling. They needed to share the loss of what everyone was experiencing. Some 2,000 people stood around the school not because they wanted to see what had happened, but to share the loss of what everyone experienced. Usually, when you have 2,000 people together in one area, you have noise. All we heard was the shuffling of feet and people crying and sobbing.”

Davis said “there is a payoff for all of this bad.”

“We’ve all done a lot of stories that have taken us everywhere,” he explained. “We’ve seen many Super Bowls, basketball championships, World Series. We’ve seen a lot of fun things. We’ve experienced a lot.”

But, for every story Davis has covered that involved tragedy and loss, there is this takeaway thought.

“We all care about people,” he said. “We are human, and when people are hurting and suffering, we acknowledge it.”

Davis’ experience as a photographer during his earliest years at KGO-TV was enhanced, only naturally, by the fact that he got the occasional opportunity to work with his father, Steve, who passed away in 2005.

“We always enjoyed each other when we worked together, my Dad and me,” Randy Davis said.

Steve Davis was an award-winning reporter and anchor at KGO-TV from 1971 to 1991. He covered most of the major stories of that era, from investigating the Rev. Jim Jones and his People’s Temple group in San Francisco before more than 900 of Jones’ followers died in a mass suicide in Guyana, to extensive reporting on the Symbionese Liberation Army, the group that kidnapped newspaper heiress Patricia Hearst. In later years, Steve covered the devastating Oakland Hills firestorm.

One story the Davises worked on together was revisiting Washington State’s Mount St. Helens volcano, 10 years after it erupted in 1980. Steve covered the eruption that year with photographers Clyde Powell and Guy Hall. In 1990, he and Randy went there to explore the volcano’s crater first hand.

“We flew to the top of Mount St. Helens,” Randy said. “It was a beautiful day, a gorgeous day. We looked down at this smoldering cauldron. It was so cool, so neat. We were up there for a number of hours getting shots and doing interviews. Then, as will happen in the mountains, the weather changed swiftly and a storm rushed in. We were just finishing up my Dad’s stand-up when the pilot shouted at us to get back in the helicopter right away.”

The pilot said later that had they not taken off immediately, the three would’ve been stuck on the mountain for days.

“So, we strapped up,” Randy said. “The chopper takes off as fast as the pilot could fly it out of there. He scared the shit out of us, actually. The pilot flew the chopper down the side of the mountain, then dropped it straight down to get out of the clouds, almost vertically, and all the while, we couldn’t see very well.”

On the way through the storm clouds, they narrowly missed hitting high-voltage power lines.

“We missed it,” Randy explained. “And in the end, we got the tape back (to the station). That’s what was important.”

Randy said his father loved horses, so when the opportunity for the two of them arose to do a story about wild horses in Nevada, they jumped at the chance.

“I got to do those really fun things with my Dad,” he said.

The two ended up having the chance to work with each other for nearly two decades.

Davis cherishes the visual memory he has of his father at work. It dates back to when the station was located in the Tenderloin.

“I’d go visit him at his office at the old station,” Davis said. “He’d be sitting there in his tiny little office. He would be typing out a story on the typewriter. He couldn’t type, so he used his two index fingers. His feet were always tapping on the floor while he typed. A cigarette hanging from his mouth, a cup of coffee nearby. I’ll never forget my Dad.”