For many of us in the news gathering business, we sometimes never know what stories we will be covering on any given day.  I remember back in 2003 when former ABC30 news anchor Nancy Osborne  (SC’ 2005) and I set out to cover a celebrity who was in town to perform a private performance for her new family.  This family belonged to her new husband, who just happened to be from California’s Central Valley, and the new bride performing for her new family just happened to be the legendary Carol Channing. You see, Nancy’s good friend just happened to be the niece of Harry Kullijian, Carol’s fourth husband. 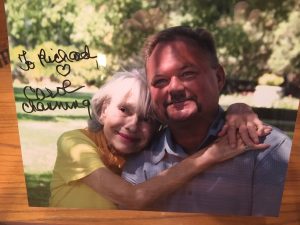 We were introduced to Carol at Harry’s sister’s home in Fresno the afternoon before Carol’s debut to Harry’s family.  I had a room set up for our interview before we met her. Seconds before sitting down with Nancy and me, I heard that distinctive voice down the hallway calling for Harry to help her with her wig. Then emerges this lady with big eyes, a big smile and even bigger eyelashes — oh yes, her wig was on perfectly!

To be honest I really did not know much about Carol Channing, other than she was a Broadway legend.  She greeted us with a smile from ear to ear and a warm hug. Nancy interviewed her about her career and her love, Harry. Boy, did she love Harry! After the interview I was able to capture her rehearsal of the private, backyard performance for Harry’s family later that night.  Of course she sang the song Diamonds Are a Girl’s Best Friend, but then came her signature hit, but with a twist. She sang Hello, Dolly, but changed the words around in the chorus to say “Hello Harry”. That evening, when she performed for a group of about 25 new family members, Harry could not have been prouder.

Over the next few years, Carol would make several appearances in Fresno promoting the Dr. Carol Channing and Harry Kullijian Foundation, a foundation that supplied musical instruments to low-income classrooms.  She and Harry loved doing that, and she and Harry loved being interviewed by Nancy and me. We were invited to their home in Modesto, where Harry lived before marrying Carol. We spent the day talking more about her love affair with Harry and the arts.  I recall seeing scattered 8-by-10 photographs of Carol’s career in no special order on the dining room table, ready to be signed by her for eager fans that have requested an autograph. She was so very proud of each and every picture on that table. Nancy told her that she looked so in love with Harry.

Anytime Carol would return to the Central Valley, Nancy and I would make sure to cover her visit.  She performed at a retirement home, appeared in front of an elementary classroom and performed publicly at a local theater, all that time raising awareness for her Foundation and making sure people knew how important Arts in the Classroom need to be.

Upon learning of Carol’s passing on Jan. 15, I want to tell you that I personally had the privilege of sharing a drink with Carol and hearing about her stories. We lost touch over the years after Harry’s death, but I will never forget that assignment — an assignment that went from a two-minute news story to a friendship with a living legend.