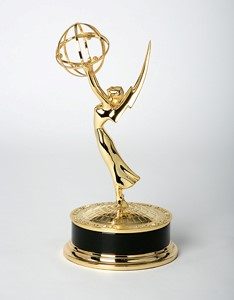 If you received an Emmy® Gold Statue, congratulations. As you’re aware those awards are for individuals who creatively participated in the entry. There is a way, however, you can reward other production members not entered on the award with you.

Stations, studios and production companies may order a duplicate statuette for display at their place of business (one each; up to a maximum of three per winning program entry) for $350 each.

Corporations, production companies, cable companies and other employers associated with winning craft entries may purchase plaques from the Academy that have a replica of the statuette and space to list the names and titles of their employees’ award recipients for display at their offices. 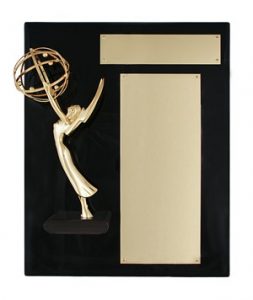 Commemorative statuettes may be ordered for display purposes only. The name plate will be engraved exactly as it appeared on the original Emmy® award and will include the word “Commemorative.”

Emmy® Wall Plaques are 10.5″ x 13″ high quality ebony piano finish plaque with engraved copy on small and large plate.  Recipients may order these to honor significant contributions to the entry. These are $350 each.

Emmy® Regional Wall Plaques are 12″ x 15″ high quality ebony piano finish plaque with engraved copy on a large plate. 18 brass plates can list each of your Emmy® Awards from the past present and future. These are also $350 each. 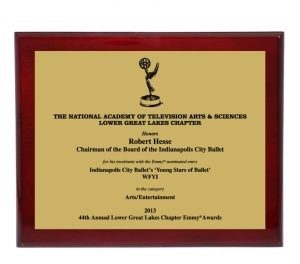 Production Plaques may be purchased for $175 by individuals designated by the entrant of an Emmy® awarded entry. These plaques are for persons who made a significant contribution to a winning piece’s award but were not listed on the original entry. The rosewood plaque is 10 ½ x 13 with an inscribed gold plate featuring the academy logo. Please allow 8-10 weeks for delivery. 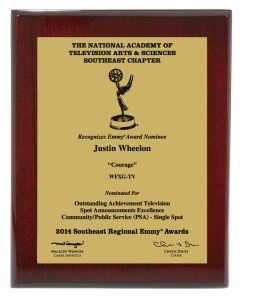 The handsome Nomination Plaque commemorating work on Emmy® Award nominated pieces may be purchased for $150. The rosewood plaque is 8 x 10 with an inscribed gold plate featuring the academy logo.

Paper Production Certificates may be purchased by individuals who contributed to an Emmy® awarded entry but were not listed on the original entry form. Cost is $25 per certificate. Send a check or money order for $25 and a brief letter stating the credit (director, editor, etc.), entry title, entry category and year awarded.

Shipping and handling charges will be added to all award purchases.

Emmy® winners may refer in advertising and publicity to the fact that they are an Emmy® recipient and for one year after the award was bestowed may use a replica of the Emmy® statuette in such advertising. A registration mark and the appropriate copyright notice (c) NATAS/ATAS must accompany any portrayal of the Emmy®.