Only those close to John Casey Zuchelli, whether friends or colleagues, would know that he and his family are an important part of California’s colorful broadcasting and television heritage.

Zuchelli, one of the most friendliest souls to ever work in a television newsroom, is also a very modest man. He would never willingly bring up this glorious factoid about himself. Sure, he is proud of his family’s heritage. There’s no doubt about that. But, Zuchelli doesn’t need to go there; he doesn’t need to talk about that heritage to show how proud he is of his family’s place in history.

If you’re not already aware, there’s a bit of a family dynasty going on around with the Zuchellis. This is, seriously, no joke. And, if the youngest members of the Zuchelli clan who also work in television decide to stay in the business for many years to come, then this dynasty has the potential to continue well into mid-century. 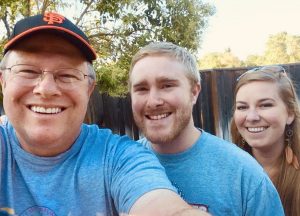 Zuchelli has not only followed in his father’s footsteps, he has followed in his grandfather’s and great-grandfather’s footsteps, too. His grandfather, Edward D. Zuchelli, “read the funny papers” on KNX radio in Los Angeles in the 1930s. Before that, in the early 1900s, John’s great-grandfather, John B. Zuchelli, founded L’Italo-Americano, the first Italian-language newspaper in Los Angeles. The newspaper is still in existence to this day. The family has been so influential through the 20th century, for instance, that they are included in some exhibits at the Los Angeles Italian-American Museum.

Talk about some serious journalistic and broadcasting lineage that really goes back in time. And, we haven’t even brought up Zuchelli’s father’s legacy yet.

Nor John’s legacy. So, let’s get started.

John Casey Zuchelli has been working in television news for nearly three decades, getting his start in 1993. He has practically done it all, and in recent years, he has been especially known for his work as a news director in Santa Maria and as an assignment editor and manager here in the Bay Area.

Santa Maria, that beautiful Central Coast community sandwiched between San Luis Obispo and Santa Barbara, makes up a third of the TV market representing Santa Barbara and San Luis Obispo counties. Santa Maria has been known to produce some significant television talent, both in front of the camera and behind the scenes. Don Sanchez hails from Santa Maria, and proudly. The longtime KGO-TV ABC7 news anchor, reporter, sports reporter and anchor, entertainment correspondent and host — he worked at the San Francisco station for four decades until retiring several years ago — is one excellent example. Sanchez grew up there, got his start in radio there and then moved on to work as a TV anchor and reporter at KSBY in San Luis Obispo, where he remained nine years until relocating to San Francisco for the rest of his career.

Like Sanchez, another outstanding television representative from Santa Maria is John Zuchelli. Born in Santa Maria, he grew up in San Luis Obispo and Morro Bay beginning in the fourth grade. He would one day go on to become news director at KCOY, the CBS station in his hometown of Santa Maria — the very station his father founded decades before. 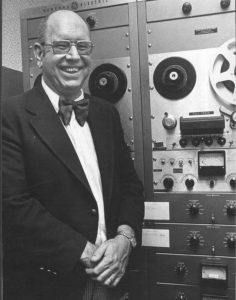 “This business has been in my blood all my life,” Zuchelli says. “Some of my earliest memories are with my Dad when he was working at the radio station in Santa Maria.”

John Zuchelli’s father, Ed Zuchelli, owned KCOY radio and would eventually establish KCOY-TV. John Zuchelli remembered how his father would bring home the station’s radio mobile unit vehicle and park it in front of their house. Though his father owned the stations, he also worked as a radio reporter covering stories throughout the community. As a little boy, John always tagged along.

Zuchelli went into the Army after high school. He would eventually serve during Operation Desert Storm. Then, he became a military police officer for the California National Guard. Afterwards, he attended Cuesta College in San Luis Obispo. Of course, he desired to work in broadcasting. From Cuesta to winding up at California Polytechnic University, San Luis Obispo, where Zuchelli was the student news director at the campus radio station. His ambition showing by the time he was 21 years old, Zuchelli expanded the station’s newscast from five minutes a day to 15 minutes, creating a “news wheel”, similar to what he listened to from San Francisco’s then-powerhouse KGO radio, the signal of which could reach all the way down the California coast.

“We did news, we had live reports, we would have a newsmaker interview every day,” Zuchelli said of his college radio station. “We made it work.”

Zuchelli would eventually get hired as an associate producer at KSBY in San Luis Obispo, in which he “did everything”. From there, he became a weekend producer, and then worked on the assignment desk.

In 2006, Zuchelli accepted an opportunity to become news director at KCOY in Santa Maria. It was a job he had to take. And, for a very good reason — it was the station his father put on the air years before. By the time Zuchelli was through, in 2012, he was one of the longest-tenured news directors in the country.

Which brings him back to KNTV, to which he returned as assignment manager and AM assignment editor following being news director at KCOY. 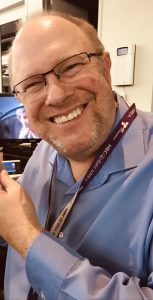 John Zuchelli’s very familiar smile, and at work at KNTV.

“I love this place,” Zuchelli said of KNTV. “We are a very good shop. We have good people here, great, talented, experienced people.”

He is a key player in daily decisions in the newsroom and is a popular presence there. He is known for his smarts, intelligence, good-natured humor and wisdom. He is also known for his down-to-earth demeanor and big smile, which is infectious. And, ask anyone there about his selfies and they will say he’s an absolute natural for the camera, whether he’s taking a picture with others or goes front and center solo.

Zuchelli isn’t the only one working in television. His son, Ed, has been carving out his own career as a producer, once working at KCRA in Sacramento as a producer. Since last year, Ed Zuchelli has been managing editor of KEYT/KCOY/KKFX in Santa Barbara and Santa Maria. Ed’s wife, Lindsay MacLeod Zuchelli, is an executive producer at KSBY in San Luis Obispo. She once worked at KNTV as a morning producer until last year, when KSBY hired her away for her first management position.

As for John’s father, Ed Zuchelli started his broadcasting career in 1940 with classmates from Beverly Hills High School, broadcasting programs over KMPC radio in Los Angeles. During his Army career, he entertained troops both on radio and in person at Army shows.

In 1947, he broadcast the boxing matches from the Ocean Park Arena in Long Beach on station KFOX.

While a student at Santa Monica City College, Zuchelli was a sports announcer on KCRW-FM. It was there that he launched his career in TV on KHJ-TV (now KCAL) in Los Angeles. He also attended the University of the Pacific in Stockton. And, in Stockton, he worked for Liberty Broadcast Network on KWG and KJOY. After graduation, Zuchelli was director of athletic promotions for the university and was in charge if sports publicity used on radio and TV and published in the newspapers in Stockton and in the Bay Area.

Once Zuchelli started KCOY-TV with his four business partners, he became vice president and sports director at the station. Eventually, he sold his interest in KCOY-TV to concentrate on KCOY radio. He was only 61 when he died in 1986.

While John Zuchelli is dedicated to his work, he is also dedicated to his family, and it shows. Always. He is a true family man. With his lovely wife, Kathy, the Zuchellis have four children. Besides oldest son, Ed, they also have another son, Casey, and daughters Monica and Isabel.

When asked what his father would say about the Zuchelli family legacy in California broadcasting, television and radio, John Zuchelli said he would most certainly be proud. But, he would be even more proud of his family.

“My Dad would be proud of our family, that we’ve got four great kids,” he says. “We are truly blessed.”