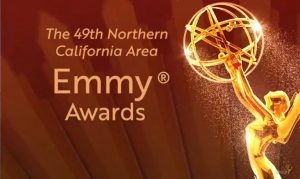 The 49th Annual Northern California Area Emmy® Awards were presented Saturday evening, June 6th for the first time via livestream only. The Emmy® Award is presented for outstanding achievement in television by The National Academy of Television Arts & Sciences (NATAS).

A total of 882 entries were received, 706 English and 176 Spanish in 63 English Categories and 38 Spanish Categories. Nominations were announced on May 6th with 178 English and 59 Spanish. Electronic ballots were submitted by a minimum of seven peer judges from other NATAS chapters and were sent directly to our accountant. The Spanish and English awards are judged and scored separately and then presented at the ceremony.

The Emmy® statuette is awarded to individuals but there is a lot of interest in the station counts: KNTV NBC Bay Area took home 17 for the English contest and KDTV Univision 14 with 14 for the Spanish contest. The overall Excellence Emmy® awards went to KGO ABC 7, English and KSTS Telemundo 48, Spanish.

The prestigious Governors’ Award, the highest honor a regional chapter can award was presented to Elliott Troshinsky, President and General Manager of KCRA 3 and KQCA My58 in Sacramento. The Governors’ Service Medallion was awarded to Governor Michael Moya, for his service on the board and photographer for our member headshots, Emmy® Gala and Gold & Silver Circle ceremonies.

You can access the entire livestream of the Awards and Zoom Party on the chapter’s website AWARDS Page.

Back to the “Off Camera” Index page…