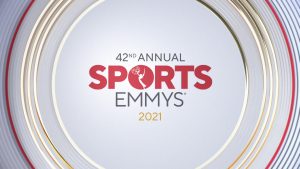 On June 8, 2021, The National Academy of Television Arts and Sciences (NATAS) announced the winners of the 42nd Annual Sports Emmy® Awards. The show was live-streamed at Watch.TheEmmys.TV and available on the various Emmy® apps for iOS, tvOS, Android, FireTV, and Roku (full list at apps.theemmys.tv/).

In addition to the distinguished nominees and winners, Elle Duncan, anchor (ESPN) announced a grant to historically black colleges/universities (HBCUs) sponsored by Coca-Cola honoring a HBCU student studying for a career in sports journalism administered by the National Academy’s Foundation.