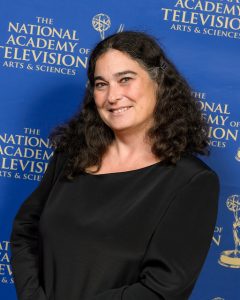 A big congratulations to former NATAS Governor and President Cynthia Zeiden. In May of 2019, Cynthia graduated with a Masters of Fine Arts (MFA) Degree.

Cynthia served as a NATAS Governor for nearly two decades. She worked diligently to put on events for members in the SF/Northern California Chapter. Cynthia stepped back from NATAS a couple of years ago to begin work on her Post Graduate Degree.

Now completed, Cynthia has an MFA in TV and Screenwriting from Stephens College. While studying, she’s also been working as adjunct faculty at Sacramento State University and running her own business – Zeiden Media.

Cynthia’s been nominated for multiple Emmy® Awards and has a passion for refining her skills as a screenwriter and producer. She also has a Masters Degree in Broadcast Management from the University of Tennessee.

While serving as a NATAS Governor, Cynthia simultaneously held an elected National Trustee position with NATAS. In addition, Cynthia had various leadership roles within the SF/Northern California Chapter including board president and program chair – where she stayed for 17 years.

Through her volunteer work, people have learned, connected with one another, and greatly benefitted from her service. She has received nearly all the honors the local chapter has to offer including the Governors’ Service Medallion in 2007, the Governors’ Citation in 2014, and induction in to the Silver Circle in 2015.

“This resume does not stop at the local level,” said SF NATAS President Steve Shlisky.  “It is rare when any member serves five terms as a national trustee – a decade in that position. But that’s what Cynthia did – also serve as National Program Chair. That position saw to the purchasing and implementation of web casting equipment shared by all of the chapters.”

Cynthia’s hard work is again paying off. Attaining an MFA Degree is a difficult undertaking and a huge personal and professional accomplishment.  NATAS congratulations Cynthia on a job well done.