College scholarship entrants just caught a break! The deadline to apply for $19,000 in scholarships has been extended one week to Friday, June 7th. 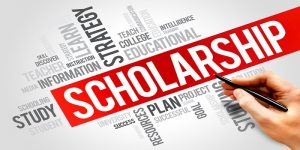 Take advantage of this extra time by submitting your entry now. To those who’ve already entered, now there’s more time to enter additional categories. There are four $2,000 scholarships, two $3,000 scholarships and one $5,000 grand-prize scholarship.

You have to be attending college in a formal degree program, but you don’t have to be a NATAS member.

To be considered for a scholarship you must be actively engaged in a collegiate-level curriculum in one or more areas of the television industry and be attending a college in Northern California (Visalia to the Oregon border), Hawaii, or Reno, Nevada.

You must have completed at least one undergraduate academic year of television studies, or be enrolled in a television graduate program.

You must have at least one remaining year of undergraduate or graduate study.

College students may apply for the following scholarships:

Jerry Jensen anchored News Scene 7 on KGO with Van Amburg for more than ten years until his death on March 26, 1984. Jerry died of pancreatic cancer at the age of 49. Jensen joined KGO-TV in 1969 as the weekend anchor. Prior to channel 7, he anchored at KBHK and KRON. Jerry was awarded the NATAS Governors’ Citation in 1968.

Steve Davis was an anchor/reporter for KGO-TV news for more than 20 years in the ‘70’s and ‘80s. He covered major events from Patty Hearst to Jim Jones and anchored the 5 p.m. News. Davis was let go in 1989 but won an age discrimination suit against ABC in 1992. Davis died of cancer on March 18, 2005.

Peter Marino was a stalwart member of the Chapter and co-founder of the Scholarship Program. He was well known for his public relation exploits as a music and video producer. Marino was a principle in a Bay Area recording studio and represented several recording companies. This scholarship covers a variety of production job disciplines.

Multiple Emmy® award-winning television reporter Rigo Chacon worked at KGO-ABC7 for 29 years as a general assignment reporter and opened the first Santa Clara County bureau of a San Francisco-based TV station. Among his many honors, Chacon is a member of the Television Academy’s prestigious Silver Circle.

Our Chapter of the National Television Academy of Arts & Sciences awards these scholarships to encourage students who demonstrate leadership and talent in advancing the artistic, cultural, educational, and technical qualities of television. Scholarships are designed for formal education only, not training or seminars.  Read about eligibility requirements and application procedures at this link:  https://emmysf.tv/students-2/college-scholarships/.

Scholarships are funded through donations to the TV Academy Fund, Inc., the chapter’s 501(c)(3) foundation.

If you’re already a working media professional, you can apply for a $2,000  grant:

LINDA GIANNECCHINI PROFESSIONAL DEVELOPMENT SCHOLARSHIP
$2,000 towards a formal degree in the pursuit of professional development

Linda Giannecchini is our most renowned local and national NATAS leader.  She has previously served as National Vice Chairman, Vice President, Secretary and Trustee. Locally, Linda is a past President and chaired the Awards, Scholarship and Speakers’ Bureau Committees. Linda currently serves as Co-Chair of the Media Museum of Northern California Consortium, and the Archives/Museum Committee. She’s an Emmy® award recipient and a member of the Silver Circle.

Remember, you must apply by Friday June 7th, 2019 to be considered for any of these awards!