The ALS community feels honored by the Emmy® nomination of a documentary about Lou Gehrig’s Disease. Patient advocates and people living with the disease will use this as an opportunity to continue raising awareness.

The San Francisco 49ers support the ALS community. The team’s been hit hard by ALS or Amyotrophic Lateral Sclerosis – also known as Lou Gehrig’s Disease. In June of 2018, 49er Icon Dwight Clark died of ALS just one year after announcing his diagnosis. 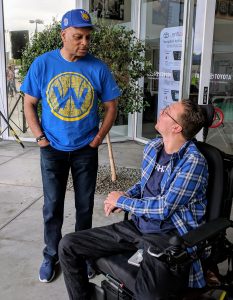 The SF/NorCal Emmy® nominated documentary is Beyond the Ice Bucket Challenge – ALS. It was produced by Sacramento PBS station KVIE Channel 6 and entered in the Public/Current/Community Affairs Program Special category.

The production shows how money raised from the 2014 social media Ice Bucket Challenge is helping people with ALS. The documentary also looks at the tragic death of Dwight Clark and brings up a possible connection between ALS and professional football. 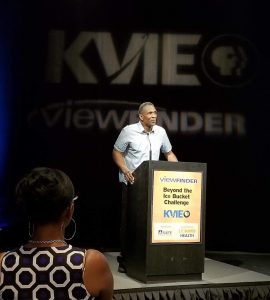 “I am very fortunate to be around some of the best ever, like Jerry Rice, Like Dwight Clark, like Joe Montana,” said Hall of Famer and former 49er Ronnie Lott. “And they try so very hard to have excellence in their lives. And when you’re around this community – ALS – you see the same thing.”

Lott has lost two friends and former team mates to ALS. He played college football with Eric Scoggins who died of ALS several years ago. Annually, he teams up with Scoggins’ wife Shonta Scoggins to put on an ALS fundraiser in Tracy, California. 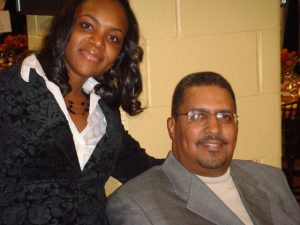 SF 49ers Vice President Keena Turner contributes to this growing ALS team organizing the ALS fundraiser. Both Turner and Lott are deeply moved by the two deaths in their football family.

Before he died, Dwight Clark asked that the game of professional football be made safer. As part of pro football management, Turner is carrying that message.

Turner, Lott and Scoggins all participated in the ALS documentary. “What an incredible honor to receive recognition and nomination for this labor of love,” said Turner. “We must continue to stand up and fight for our loved ones as they battle this hideous disease.”

Scoggins will be attending the Emmy® Gala June 8th in support of the documentary and recognition of ALS. “If you don’t “STAND” for something, you’ll FALL for anything,” said Scoggins, adding, “I stand in honor of my late husband Eric Scoggins Sr. He had determination, even until his last breath, to make a difference in the lives of those battling ALS until there’s a cure.”