Hawaii is luscious, beautiful and green. Flowers are fragrant and the aroma gives the islands a very distinct and lovely personality. But one-year ago, a piece of the Big Island spewed venom. Hell had overcome a little bit of heaven.

The Kilauea Volcano erupted, leaving in its path of destruction seven-hundred homes. Entire communities in an area called Puna were wiped off the map.

At first, the lava flow began relatively slowly. Then, as it picked up, enormous lava fountains started bursting through the ground.

Pamela Young is a veteran TV producer/reporter at KHON 2 in Honolulu and Vice President of the Hawaii market for SF/Northern California NATAS. A 12-time Emmy® Award recipient, her work also has earned her a Peabody.

More than 25-years in the industry and Young has been inducted into the NATAS Silver Circle, class of 2004. Still, as seasoned as she is, some stories leave vivid and haunting memories. The Kilauea volcanic eruption left a scar on Puna and impacted people covering the news event. 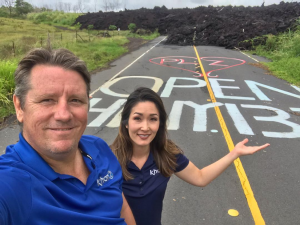 KHON photographer and reporter Sara Mattison return to the Big Island one year after the big eruption.

Fourteen-square miles of land were eventually covered by lava. In some places, the lava remains so thick that it could take up to 20-years for it to completely cool down.

Kilauea is now quiet and the process of rebuilding is underway. As Pamela looks back, she remembers Puna as a natural wonder – gone in the blink of an eye.

KHON Photographer Eric Bathen covered the natural disaster. Returning to Puna a year later, Eric said that looking around is a very grounding and humbling experience.

“To meet with old friends and families and see how their lives are unfolding in the new landscape of the lower east rift zone is showing so much resiliency and strength and aloha despite the many obstacles,” said Bathen.

He admits people who live in the region are called Puna-tics – because they have to be crazy to live in Puna. “There’s this guy, Hawi, he’s building on top of the flow,” said Bathen. “When life gives you lemons, you make lemonade. When life gives you rocks, you build a rock wall. We’re Puna strong. We’re going to keep going.”

Covering the story, undoubtedly, has had an impact.“If anything, it’s a confirmation of why I’m doing what I’m doing,” he said. “This is reality, real people, real stories.”

Bathen continued, “When you get on these assignments, I get the sense this is what I’m meant to do, despite the danger and the hassle. Gotta push yourself. It’s not the warm fuzzies that make you grow. It’s the challenges.”