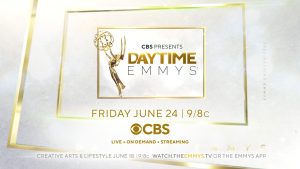 Categories to be presented are:

The June 24th telecast will mark the 16th time CBS has broadcast the Daytime Emmys®, more than any other network. The Creative Arts and Lifestyle Emmy ceremony will stream live at 9 PM ET/6 PM PT on Saturday, June 18 at watch.TheEmmys.tv and via The Emmys apps for iOS, tvOS, Android, FireTV, and Roku (full list at apps.theemmys.tv). The final determination of categories presented on the CBS broadcast vs. Creative Arts ceremony will be announced closer to the respective airdates.

All awards are judged by a pool of more than 1,000 peer professionals from across the television industry, whose confidential ballots were then tabulated by the independent accounting firm of Lutz & Carr, LLP.