The Regional High School Student Television Awards are intended to be an incentive for the continued pursuit of excellence by those studying media and journalism. 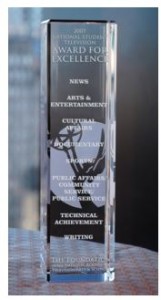 Entries will be accepted through March 15 from high schools with media programs in the Chapter region, which extends from Visalia to the Oregon border and includes Reno, Hawaii and Guam. Eligible media must have been created between March 1, 2018, and Feb. 28, 2019. Categories include News, Sports, Public Affairs, Arts and Entertainment as well as crafts.

Last year,  a record 13 Pillars for Excellence and 17 Certificates for Merit were awarded to chapter high schools.

Recipients of the Regional Student Television Awards for Excellence are automatically entered into the national competition at no charge. Six national awards were given to high schools in our chapter last year:

Two years ago, four national awards were given to Wai’anae High School in Hawaii.

Entrants must apply by March 15.  If you have any questions, please contact Chapter Executive Director Darryl Compton at Darryl@emmysf.tv.