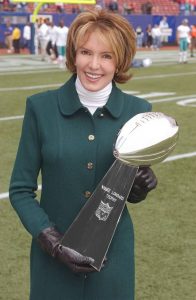 New York, NY – The National Academy of Television Arts & Sciences announced that Lesley Visser, the pioneering sports reporter and one of the most highly acclaimed female sportscasters of all time, will become the first woman to receive the Sports Lifetime Achievement Award at the 41st Annual Sports Emmy® Awards. The event will take place in New York City at Jazz at Lincoln Center’s Frederick P. Rose Hall on Tuesday, April 28th, 2020.

“To be a pioneer at nearly every juncture of sports reporting isn’t easy despite how Lesley Visser makes it look,” said Justine Gubar, Executive Director, Sports Emmy® Awards. “Lesley has spent her career serving as an unparalleled role model and mentor to countless up-and-coming journalists including myself. Her generous spirit, breadth and depth of knowledge, and professionalism shine in our industry and The National Academy could not be more thrilled to honor Lesley with our Lifetime Achievement Award for Sports.”

“For 45 years Lesley Visser has been a leader and trailblazer in both print and television journalism,” said Sean McManus, Chairman, CBS Sports. “Very few people have had the word first attached to them throughout their career as much as Lesley, and even fewer have created a place in an industry that never existed. From first working in press boxes with a credential that read, ‘No women or children,’ to becoming the first woman assigned to work ‘Monday Night Football,’ and to being the first woman enshrined into the Pro Football Hall of Fame, there is no one more deserving to be honored as the first woman to receive the Sports Emmy® Award for Lifetime Achievement.”

“When you look at Lesley Visser’s resume which is a long list of accomplishments,  where 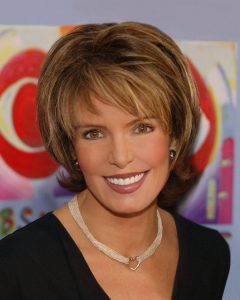 almost everyone begins with ‘the first woman,’ the phrase that comes to mind for me is  ‘one of the best damn journalists I have ever worked with,’” said  Vince Doria, former Sports Editor, Boston Globe and former Vice President and Director of News at ESPN. “While Lesley is a pioneer in every respect, gender has nothing to do with the fact that she’s just a damn good reporter.”