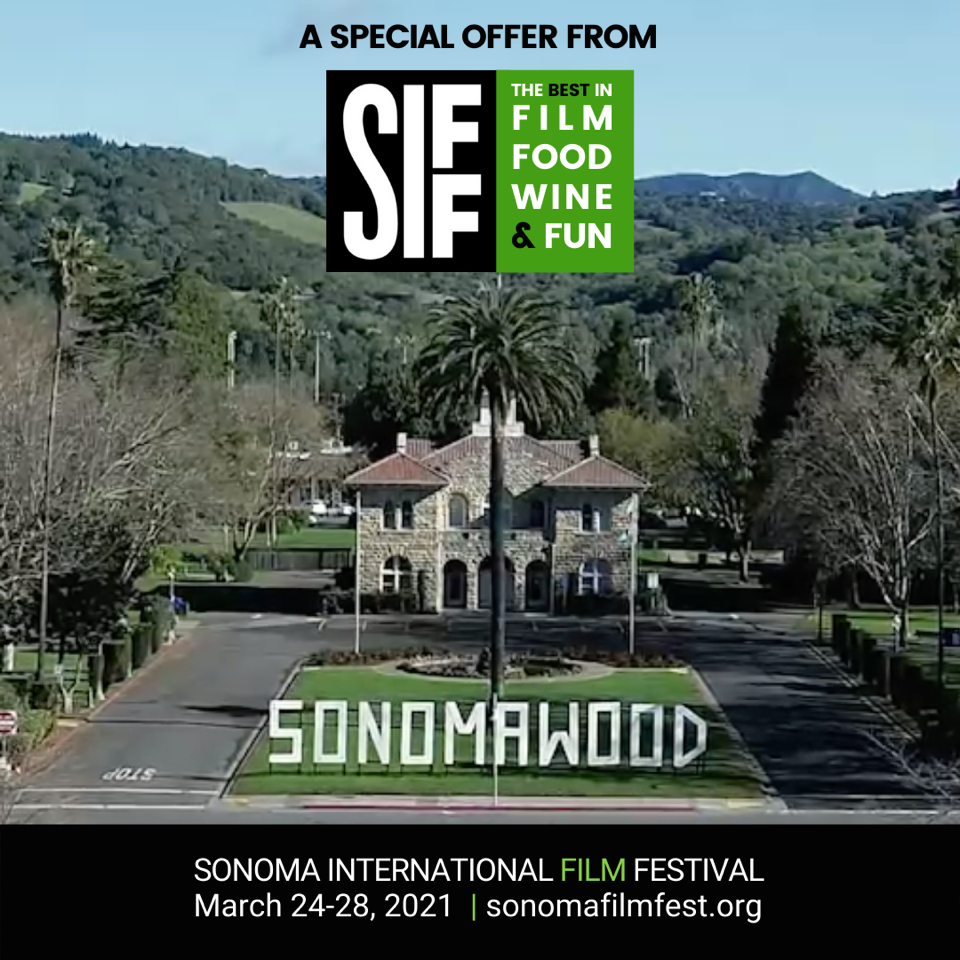 We have secured a special offer for NATAS Members – a discount on passes for the Sonoma International Virtual Film Festival from March 24-28, 2021. Save $25 on the SIFF Virtually Everything Pass to watch the five-day online film festival, with more than 100 films from 40 countries.  The pass also gives access to “SIFF Saturdays” – special movies on the last Saturday night of the month all year long.

The 2021 “Virtually Everything Pass” Includes

NORMALLY $175
NATAS MEMBERS save $25
SIGN IN to your Member Account in Emmy Express and see the “MEMBER BENEFITS” page for the NATAS Discount CODE.

The Sonoma International Live and Virtual Film Festival (SIFF), an entirely walkable and clickable five-day festival, is a 501(c)(3) non-profit organization dedicated to promoting the best in independent film and filmmakers from around the world, inspiring savvy film lovers, and introducing the power of film to student filmmakers.

The Festival Catalog has just been published here.  Pre-order your Festival Films!

Opening Night film is SIX MINUTES TO MIDNIGHT starring Judi Dench, Eddie Izzard (writing credit as well), Jim Broadbent, James D’Arcy.
Story: Summer 1939. Influential families in Nazi Germany have sent their daughters to a finishing school in an English seaside town to learn the language and be ambassadors for a future looking National Socialist. A teacher there sees what is coming and is trying to raise the alarm. But the authorities believe he is the problem.
Trailer

Closing Night film is THE COMEBACK TRAIL starring Robert De Niro, Tommy Lee Jones, Morgan Freeman, Zach Braff, Emile Hirsch.
Story: Two movie producers who owe money to the mob set up their aging movie star for an insurance scam to try and save themselves. But they wind up getting more than they ever imagined. A remake of the 1982 action comedy of the same name.
Trailer

Opening and Closing Night films are $15 each, all full length features and documentaries are $12, shorts are available for $5 – if you reserve a handful of films, getting the Pass makes sense! And sometimes studios place limits on the number of pre-orders to certain movies – Pass holders get priority reservations.

And you can vote for the Audience Awards where films will win cash prizes.

SIFF2021 being a Virtual Film Festival, you can sign in on any device, even “cast” movies to your TV set, and watch the films with family and friends.

Enjoy the SIFF2021 with our discount on the Virtually Everything Pass!

—
Renew your Membership by March 31 here.