The National Academy of Television Arts and Sciences (NATAS) today announced the nominees for the 40th Annual Sports Emmy® Awards, which will be held in New York on May 20.

“The multiplicity of opportunities for the enthusiast to become passionately involved with the teams and superstars of the sports universe boggles the mind,” said Adam Sharp, President & CEO, NATAS. “With this being the 40th anniversary of the Academy’s commitment to honoring the absolute best in sports coverage, we are anticipating a very exciting show celebrating these outstanding nominees.”

“We’ve never seen such high-quality nominees from such a diverse group of entrants,” said Steve Ulrich, Senior Vice President, Sports Emmy® Awards and Events. “I’m especially looking forward to the presentation of the Sports Lifetime Achievement Award to Dick Vitale. He has truly changed the lexicon of college basketball coverage with his iconic lingo, topped off by his boundless energy. Laughter and tears are virtually guaranteed when he steps to the podium to accept.” 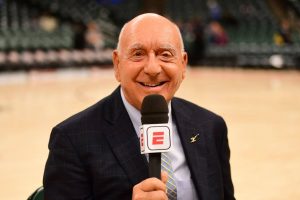