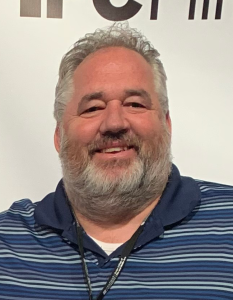 Meet Bill Henshaw. He has been the Digital Media Instructor at Redwood High school for 6 years. A graduate from CSU Dominguez Hills with a degree in Digital Media Arts, and Television Arts, Henshaw also received a master’s degree in Business and is now finishing up his Doctorate in Education. Henshaw was introduced to Mr. Smith‘s high school video production class when he went to his son’s Video Production classroom and was impressed by the amazing equipment at the high school level and fell in love with teaching. During that year, Henshaw made a short movie called Becoming Lindsey with the students.

Henshaw has also developed an award-winning program that has given students opportunities to compete. In the past students have competed and won in the State of California Directing Change competition. Every year Henshaw’s students compete and win in the Slick Rock Film Festival that is for all the High Schools in the South San Joaquin and South Valley at the Fox Theater in Visalia.

In 2019 students competed in the All-American Film Festival in New York and won the sports highlight video category. This year for the first time Redwood Students submitted 18 projects to the Student Production Awards.

Redwood is located in the breadbasket of America, surrounded by one of the biggest Agricultural counties in the US. Through the digital media arts program students have the opportunity to have access to professional equipment and opportunities to make projects for the school, community, and competition. The high school has a rich tradition of events such as the big Cowhide game against cross-town rival Mt. Whitney High school. Rallys are a big event but because of Covid and remodeling, it hasn’t been done in over a year. Some of the rallies include Ice Breaker, Battle of the Classes, and Log Assembly. Club day is a big event every year as Redwood has several clubs on campus. Sports are a big part of the culture, and many students are involved in playing watching and recording games.