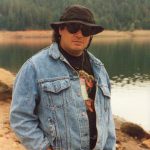 A star-studded cast of characters and odd ducks somehow navigated their way into a Zoom room September 16, 2020 at 7 PM, participating in a virtual memorial service for old-time KOVR Photographer Marty Hernandez, who recently died. Considered the Rodney Dangerfield of the newsroom, people knew Marty would not have wanted a somber celebration of life. 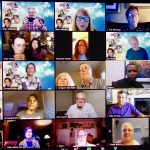 Hernandez was a stellar photographer who worked at KOVR for decades. Some wild stories flowed during the Marty Party that lasted nearly three hours. About 60 former KOVR employees attended – from three time zones and nine states. “It was really a fun bunch for me and it was really great to see some of them again,” said Mike Ferring, who was news director at the station in 1989 and hired many familiar faces. “It sent me into a couple hours of reflection,” Ferring continued.

NATAS Silver Circle Member and Governors’ Award recipient former News Anchor Stan Atkinson hosted the zoom tribute. NATAS Member Jameson Mitchell assisted many of the “oldsters” find their way into and around the Zoom world. He also virtually initiated and directed the tribute. 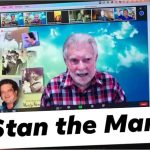 “I think we used, abused, and bent the Zoom feature as many ways as possible to get all of the 40 or more KOVR 13 alums online at some point in the two plus hours we were hooked-up,” said Atkinson. “The memories and recollections of this guy who had such a wonderful part in our experience at 13 were touching and as funny as Marty would have liked. We closed out the event thinking we’d hopefully done something meaningful for Marty’s family. And at the same time, the mere matter of doing it had been excellent therapy for us all.”

Zoom was extended for a few stragglers. “Photographers Mike Lowry and Ken Day along with Reporter George Franco and I essentially closed the bar down,” said former KOVR employee Erin Komatsubara. “Oh yeah, there was Eric too. But he was dead asleep. We could see him tilting sideways in his chair more and more and slipping lower, waiting for him to tip over out of the shot.”

Day, incidentally, is being inducted into the Silver Circle this year. “After Stan adjourned the Zoom and I signed off, I got a text that read, “WE’RE STLL ON! Come on back! I did return and got to speak,” said Day. “It was the only way to say good bye and it was fun.” 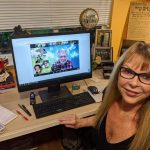 Chapter Board Member Joyce Mitchell at the Zoom Room Tribute

Funerals and memorials are not being held during this time of COVID. Saying goodbye was important for this crew. “It was a special event for a very special person who meant a lot to us all and it all went off without a hitch,” said Lowry. “How about we do it again but let’s not wait for a friend to leave us to do it.”

For the Zoom tribute, Lowry put together a video that will leave you chuckling. Just as Marty would have wanted. Here’s the link.