Walt Harris is a true Bay Area broadcasting pioneer. Through a nearly half-century career, he has seen radio and television change, both in the way each is programmed as well as how the latest technologies continually alter both. Only a few people who have lived in the Bay Area for years would likely know Harris’ name. Few may realize he was a force to be reckoned with during his 28 years as an announcer and director at KTVU in Oakland, to which he’s likely best known for presiding over the station’s endless airings of wrestling matches and roller derby shows in the 1960s and 70s. At that time, it was what the station – then an independent and decades from becoming a Fox affiliate — was known for. 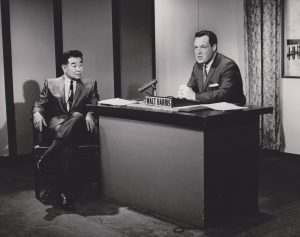 And for those who have worked at KTVU at one time or another (including myself) or who currently call the station home, it’s likely that no one could ever realize that Harris was KTVU’s first employee. Today, at 88, Harris’ voice still resonates with the kind of gruff clarity he was known for, especially during his years announcing wrestling and roller derby at KTVU. Now a soothing kindness to his voice more evident. It has perhaps softened with time. In 1989, Harris was inducted into the NATAS Silver Circle. That honor came three years after retiring from KTVU as that station’s very first employee.

A Washington state native, Harris grew up in Tacoma, eventually graduating from Pacific 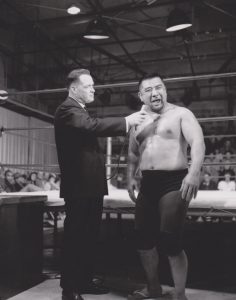 Lutheran College in the late 1930s. His dream at the time was to get into radio.

“I was always one of those kids who listened to radio, so after getting out of school, I went to a station in Yakima. That’s where I got my start,” Harris recalls. Over the next few years, Harris bounced around the western United States, getting hired for radio jobs in Albuquerque, Seattle and Los Angeles. While in southern California on vacation, Harris was introduced to a radio announcer at CBS, who suggested to Harris that he could get hired at the network as an announcer.

Harris stayed a short time in Los Angeles, but the Bay Area was his ultimate destiny. During World War II, Harris landed a job at KFRC-AM.

“I did a show with Merv Griffin,” he says. “Merv would play the piano and I’d do the announcing. We had bands touring the country in those days, and they would stop by our studios. One day, Griffin joined one of those bands, and left KFRC.” But, Harris remained. 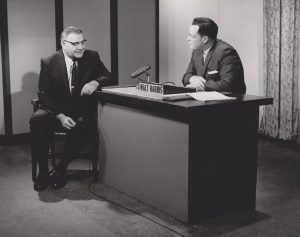 One of his greatest memories of working at the San Francisco station was when Gen. Douglas MacArthur came to town. Harris covered MacArthur’s arrival at San Francisco Airport. “Everyone wanted to look at that man,” Harris says. “We were all driving back up to San Francisco from the airport, and the Bayshore Freeway was just a parking lot. People stopped their cars, got out, and gawked as General MacArthur rode on by as we headed into the city.”

By the end of World War II, in 1945, Harris says everyone thought the end of radio was around the corner. Television was still very much in its infancy, but there were indications by then of the kind of potential television would have on American culture. After seven years at KFRC, Harris was laid off. From there, he thought he would try television. It wasn’t long after his departure from KFRC that Harris would begin announcing commercials for KPIX, the first television station to go on the air in San Francisco.

Harris worked at KPIX for a short time, then stayed a year at KOVR in Sacramento. He returned to San Francisco and began announcing commercials for KGO-TV and KRON, which eventually joined KPIX as the Bay Area’s first three TV stations. But, it was Harris’ friendship with William Pabst that would be significant for his career. In the 1950s, Pabst had secured a license from the Federal Communications Commission to operate Channel 2 in Oakland under the call letters KTVU. It would be the spring of 1958 by the time KTVU took to the airwaves, but by then, Pabst had hired Harris as the station’s first-ever employee. At KTVU, Harris’ first position was as a production manager, director and announcer. “I did everything,” he says. “And I did live announcing for Channel 2.”

From the station’s inception in 1958 through the 1960s, Harris was the voice of KTVU. Being an independent station competing against the bigger, more profitable network affiliates in San Francisco, KTVU had to find itself a niche. It already had the Bay Area’s first 10 p.m. newscast, but it needed more than that. Enter live wrestling matches and roller derby shows.

“I did three wrestling shows, and I was always doing roller derby,” Harris says. “I had too many things going on all the time.”

Eventually, station management would switch gears as the popularity of wrestling and roller derby began to wane, cancelling its stable of wrestling and roller derby programs. Harris switched gears as well, continuing to announce for the station, but also moving over to produce and direct San Francisco Giants games, which KTVU used to broadcast. He also produced and directed the Giants pre-show and post-show segments.

After 48 years in radio and television, Harris retired from KTVU in 1986.

“I had a good run there,” Harris says. “My career was very rewarding.”

Once a longtime San Jose resident, Harris and his wife, Carmel, now live in Danville’s Crow Canyon Country Club neighborhood. Once an avid golfer, a shoulder injury prevents Harris from playing his favorite game, even with the green tantalizing him just feet away from his home. These days, Harris leads a quieter life. He and his wife are about to celebrate their 60th wedding anniversary. Their only child, a son, died of cancer three years ago, a tragedy that Harris doesn’t mind talking about, even though it is very clear that he still misses his son very much.

But, recalling his many years in television, Harris says he “enjoyed it all so very much.”

“I worked almost harder than anyone else during those years. Wrestling shows, roller derby, Giants games, station announcing. It was just an incredible time for me,” he recalls. “I’ll never forget my good fortune.”

Kevin Wing has been penning “Gold & Silver Circle Profiles” for “Off Camera” since 2007. He is a journalist at KNTV NBC Bay Area, a journalism professor at Ohlone College and is principal of his production company, Kevin Wing Media Communications. A two-time Emmy Award-honored journalist, he was inducted into the Silver Circle in 2013.