One of the first anchors in the Hawaii market has died.

Wayne Collins was 91 when he died this summer in Tucson, Arizona.

Collins grew up in southern California’s San Fernando Valley. He arrived in Hawaii as a member of the Coast Guard during World War II. In 1952, he anchored Honolulu’s first regularly scheduled newscast, the  “Pan American World News.” 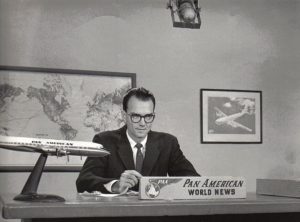 “Collins adlibbed the 15-minute news at a time before TelePrompters existed, and he never once spoke from prepared copy,” said television archivist AJ McWhorter. “The newscast had no reporters, so Collins shot and processed his own 16mm film.”

He later anchored at KTRG (now KHNL) and KHON. In 1966, he left television news to work in ocean and environmental research at the Oceanic Foundation and University of Arizona.