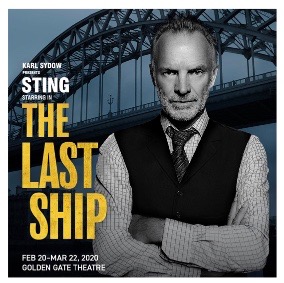 A new perk for NATAS members is discount theatre tickets for you and your guests, thanks to Broadway SF (formerly SHN SF).

You might have attended the special reception and performance of the musical “Hamilton” that was enjoyed by 84 NATAS Members and guests on October 24 at the Orpheum Theatre in San Francisco. Soon after that, Broadway SF announced that the run for “Hamilton” would go beyond the previous end date of January 5, now extended through May 31. NATAS members will be granted discounted seats for future performances of “Hamilton” and other Broadway SF shows!

Promotional Codes will be sent to NATAS Members via email – or contact the Academy Office at: office@emmysf.tv

Here is the current list of discount tickets available to NATAS Members for Broadway SF performances:

“SUMMER: The Donna Summer Musical
Donna Summer didn’t just sing disco; she grew up as a gospel choir singer, but also sang in a rock band, and spent a year in Germany as a member of the cast of Hair, before joining the Viennese Folk Opera. Golden Gate Theatre

“The SpongeBob Musical”
Perfect for both kids and their adults, join SpongeBob Squarepants, Patrick, Sandy and Squidward as they take you on the ultimate thrill ride as they rush to save Bikini Bottom from ultimate doom. The score features artists like Cyndi Lauper, The Flaming Lips and the late David Bowie. Golden Gate Theatre

“The Last Ship”
Sting stars in his critically acclaimed musical featuring original music by the Police frontman himself, a heartfelt and empowering musical about Newcastle’s shipbuilding community reaching breaking point in the 1980s. Golden Gate Theatre 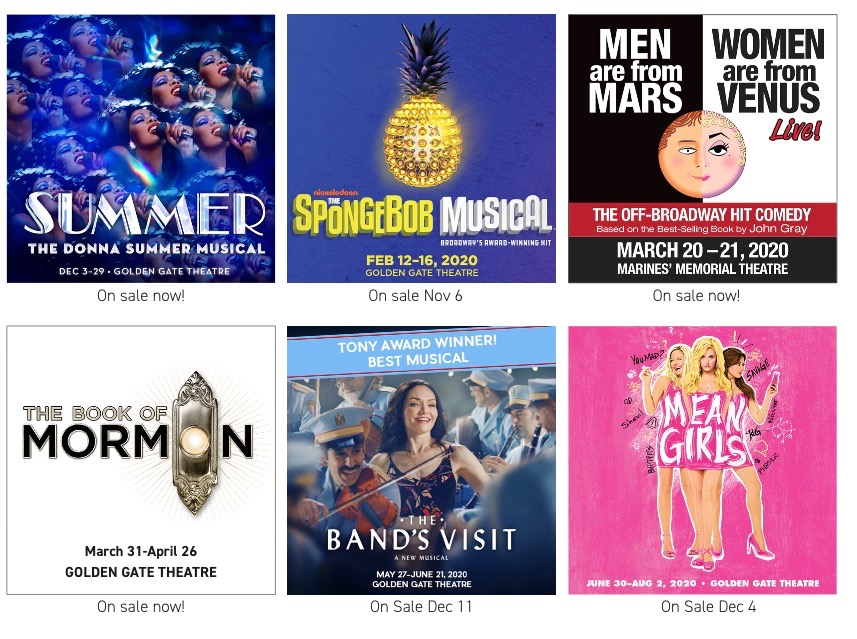 “Men Are From Mars – Woman Are From Venus Live!”
Moving swiftly through a series of vignettes, the show covers everything from dating and marriage to the bedroom. Marines’ Memorial Theatre.

“The Book of Morman”
This outrageous musical comedy follows the misadventures of a mismatched pair of missionaries, sent halfway across the world to spread the Good Word. Golden Gate Theatre

“The Band’s Visit”
In this joyously offbeat story, set in a town that’s way off the beaten path, a band of musicians arrive lost, out of the blue. Golden Gate Theatre

“Hamilton”
The story of America’s Founding Father Alexander Hamilton, an immigrant from the West Indies who became George Washington’s right-hand man during the Revolutionary War and was the new nation’s first Treasury Secretary.  Featuring a score that blends hip-hop, jazz, blues, rap, R&B, and Broadway, The story of America then, as told by America now.  Orpheum Theatre

As a NATAS Member, look for an email with our Broadway SF Promotional Codes – or contact the Academy Office at: office@emmysf.tv