With a twinkle in his eye, a devilish grin, and determination like few others, television Photographer John Pavlovich always stood his ground to get the very best shot possible. Sometimes on the sidelines, pro ball players would be heading out of bounds straight for his camera. And Pavlovich didn’t budge – as you can see below. And if he went down, he was back up on his feet shooting in seconds.

—
He’d often end up with one of the most memorable shots of the game. And they were played and re-played throughout. Recently, Pavlovich had been stoked about again covering the Oakland Warriors.

Pavlovich worked years at Sacramento station CBS 13 before going freelance as a sports camera person. “Spent a lot of hours with Pav covering news,” said former CBS 13 News Reporter John Lobertini. “Pav is among the very best photographers I ever worked with in TV news. But it was his passion, humor and infectious personality that always stood out.”

Known to many as simply Pav, he began shooting Kings games when the team arrived in Sacramento decades ago. He’s covered countless Super Bowls, NBA Championships, and was greatly anticipating working the Warriors vs. Raptors games. He was also looking forward to going to Japan for the Olympics.

Services for Pav were held June 20, 2019 at the Golden 1 Arena in Sacramento. “How appropriate the services will be held at Golden 1,” said friend Vickie Iander. “Pav must be smiling from heaven.”

Pav was personable and professional. “Great shooter and guy,” said former CBS 13 Anchor Stan Atkinson. “Wry humor and could cut through BS like a knife. Too young. Such a loss.”

Pavlovich was 61-years-old when he died. He liked cycling, gardening, and loved spending time with his wife Tina Tafoya. Along with his wife, Pav is survived by his two sons Paul and Aleks Pavlovich. Exact cause of death has not yet been determined. 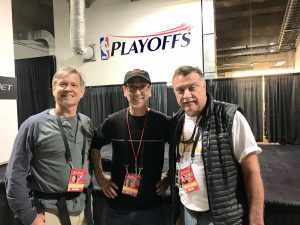